How St. Louis churches are revealing the disparities in the air we breathe

(RNS) — A few weeks before speaking at a rally pushing for solutions to improve air quality in St. Louis, DeAndress Green was in the hospital, feeling like she was unable to breathe.

Green had suddenly begun feeling short of breath after spending some time in an industrialized north St. Louis neighborhood, where she was delivering food through DoorDash to families who lack transportation to grocery stores. When Green went to the hospital, doctors found blood clots in her lungs.

“I was in the hospital for a few days before the doctors figured out what was wrong,” she said at the July 23 rally, organized by Metropolitan Congregations United, a coalition of about 60 religious communities around St. Louis. Green works with MCU in its ongoing activism around local environmental crises. “That whole week, I lived in fear, planning for the worst.”

But for Green, a Black urban farmer and small business owner who had grown up in north St. Louis, this was but the latest in a lifetime of chronic respiratory problems — for her and for her family. All her family members suffer from asthma. She says she’s always known the cause: her neighborhood’s poor air quality.

Green grew up in the College Hill neighborhood, in government housing that was less than a mile from Procter & Gamble’s factory along the north St. Louis riverfront and other industrial facilities that burn metals or chemicals producing pollutants in the air. Trees were few and far between. The apartments in which she lived were plagued with black mold; the schools she attended had lead paint peeling from the walls. That’s also the case for many other members of the church she grew up in, Epiphany United Church of Christ, and other local congregations. 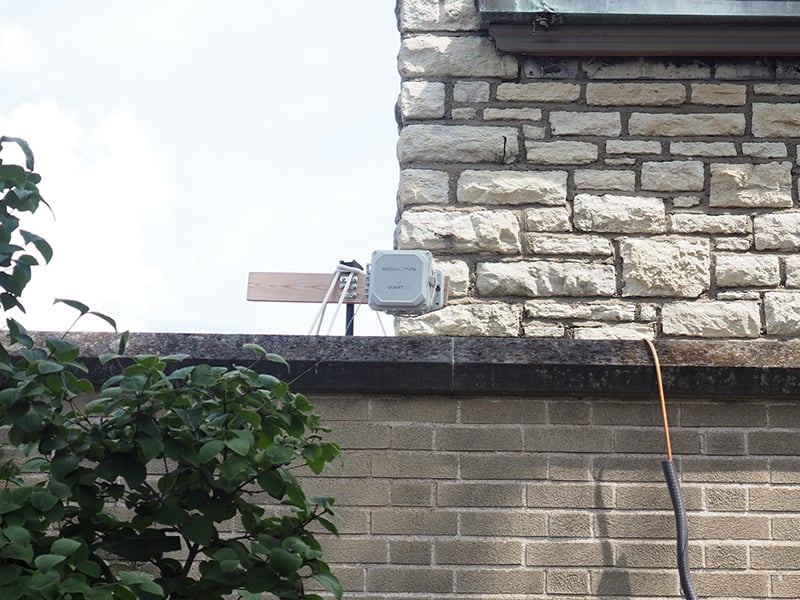 An example of one of the low-cost air pollution sensors at First Unitarian Church of St. Louis. Photo by Britny Cordera

Earlier this year, the multifaith coalition launched a new online air quality monitoring tool, tracking pollutants in the city in partnership with scientists at The Nature Conservancy; the Jay Turner Group, part of Washington University’s Department of Energy, Environmental and Chemical Engineering; and the university’s environmental studies program.

The community-based air quality monitoring initiative, AirWatch St. Louis, has been keeping track of what’s in the city’s air since December 2021. Low-cost sensors are placed on the roofs of MCU churches spread throughout the city to measure particulate matter, a mixture of solid particles and liquid droplets found in the air. Through the new digital map, the data collected by these sensors is publicly viewable.

MCU organizers say they see their efforts to collect and publish data on air quality as part of their spiritual commitment to racial and environmental justice. Since many religions believe that the Earth is sacred, created by a divine being, the effort to protect the environment brings congregations of varying backgrounds together to fight against climate change, according to Kentaro Kumanomido, an environmental justice organizer with United Congregations of the Metro East, another faith-based organization that worked closely with MCU on the air quality rally. 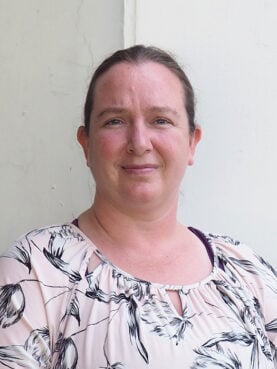 Beth Gutzler, who has lived in houses with lead paint and currently lives near West Lake Landfill, where locals are concerned that trash smoldering underground is dangerously close to buried nuclear waste, leads MCU’s environmental justice team. She believes this project is critical to empower people in faith-based communities who are affected by industrial pollution, giving them the tools to take control of the fate of their neighborhoods through legislative action.

>“Our goal is to bring people of multiple faiths together to work towards a common goal of changing policy for social and environmental justice,” she says.

According to Tyler Cargill, a doctoral student with the Turner Group, the spatial variety and community connection MCU churches offer have been central to this project. Some of the churches are in downtown St. Louis, while others are in Webster Groves, a suburb. Some churches are in areas with a high density of roads. Some are near parks. And others are near industries that release particulate matter into the air.

“By having a variety of placements of these sensors, we do get to see if the urban planning of St. Louis makes any difference for what we’re seeing with our air pollution,” Cargill said.

A 2019 report on environmental racism in the city, published by the Washington University School of Law, found that most St. Louis’ air pollution sources are in predominantly Black neighborhoods.

According to the report, Black children in the city of St. Louis are 2.4 times more likely than white children to test positive for lead in their blood. They also account for more than 70% of children suffering from lead poisoning, researchers found, and make about 10 times more emergency room visits for asthma each year than white children. Majority-Black neighborhoods are more likely to be near highways and to see more building demolitions, which creates dust that may contain asbestos and lead. 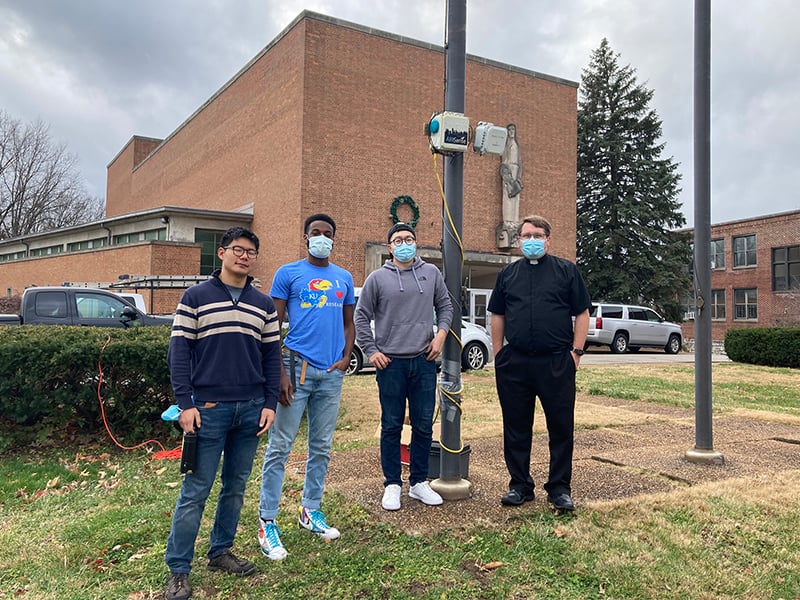 A national study published in 2019 found that people of color bear a disproportionate “pollution burden,” with Black Americans being exposed to 56% more pollutants in the air than they themselves create. This has deadly consequences: A study of nine deadly health conditions, including lung cancer, kidney disease and hypertension, linked with such exposure concluded that pollution kills about 200,000 Americans a year.

For MCU, working to improve air quality for vulnerable communities is a matter of faith.

The Rev. Kevin Anthony, who serves at Pilgrim Congregational United Church of Christ and as a member of MCU’s interfaith environmental justice task force, points to the biblical narrative of creation, in which God breathed “the breath of life” into man’s nostrils.

“I want us to imagine … each and every one of us having that same posture, leaning over one of our neighbors to breathe life into them,” he said during the rally. “In order for us to have life, we need to have good quality air to breathe.”

On Broadway, only a few blocks away from Green’s childhood home, neighborhoods are filled with abandoned buildings and illegal dumping. A sweet smell fills the air. 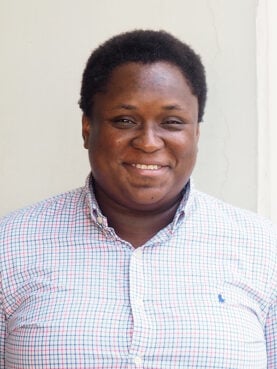 “I just assumed it was Hostess baking Twinkies, but the adults knew better,” she recalls. Her mother later told her the smell was an indication of industrial pollutants. “Broadway to the water is prime real estate for pollution industries.”

Whenever the sweet air filled the inside of the home, Green’s mother would take her and her siblings south to Tower Grove Park to get fresh air. “The difference in the environment in north St. Louis and south in St. Louis is unmistakable,” Green says. “There are trees, green spaces, businesses, and communities who want to be outside in south St. Louis.”

When Green moved out of government housing at 18, she was struck by how she could immediately breathe better.

Today, Green uses urban farming to heal her lungs and reconnect with the outdoors. But for many people of color in St. Louis and beyond, simply stepping outside is a potential health risk for environmental reasons. Families who live in so-called sacrifice zones, areas around the country where rates of cancer caused by air pollution exceed the U.S. definition of acceptable risk, are not being informed of the risks of industrial or Superfund sites — federally recognized hazardous waste sites — near their homes and are not given the resources to change their neighborhoods.

For Cargill, the project’s goal is to increase transparency. His lab gives periodic updates to the congregations and to the public. At these meetings, information is shared about air quality problems in general, what the Turner Group is doing with that research and what initiatives the community can take to advocate on its own behalf.

Action is even more urgent now that the White House’s Inflation Reduction Act gives $315.5 million for air monitoring so at-risk communities can be properly informed of what is in the air they breathe, offering an avenue toward legislation and reparations.

The particulate matter sensors on the church roofs, manufactured by QuantAQ, are a low-cost version of the EPA’s sensors, which cost tens of thousands of dollars. But even the monitors MCU is using cost $1,500.

Someday, Green would like to have her own air monitoring device. But even an at-home outdoor monitor from Purple Air costs nearly $300. She believes AirWatchSTL is helpful, but not everyone in her community has access to a smartphone or computer or has time to check the website to assess their risk.

“One of the things that I’d love to see happen is that maybe smaller devices are made available to communities,” says Green. “So we are allowed to see for ourselves how to navigate that environment.”

Organizers say solutions need to go beyond just making these sensors widely available. For Green, who was uninsured during her hospitalization and has been left with a pile of medical bills, real solutions must take the form of reparations.

That would look like Black families being allowed to dictate what will happen in their own communities, instead of nonprofits or think tanks coming in and implementing what they think will work, she says.

“I want my community to feel like they can escape to north St. Louis and feel safe, not run from it because of racism and hate embedded in the land,” she says. “Solutions look like Black families being able to build their dreams in their front yards and provide food for their family from their own yard. Solutions look like families being able to breathe.”

This story was published in partnership with Next City, a nonprofit news organization covering solutions for just and equitable cities, as part of an ongoing series on how faith drives communities to work against urban injustices.