(RNS) — Soon after a white 18-year-old shooter targeted Black customers of a community grocery store in Buffalo, New York, on Saturday (May 14), the Rev. Denise Walden, executive director of Voice Buffalo, a social justice and equity organization, was coordinating clergy to offer grief counseling and help families immediately and, she hopes, for the foreseeable future.

She was also grieving personally: She knows the families of most of the 10 people killed in the massacre.

“This is going to take more than a week, more than a month, more than six months,” said Walden, a member of the clergy team at First Calvary Missionary Baptist Church, a predominantly Black congregation in Buffalo. “We need long-term solutions and support.”

Walden’s 25-year-old organization is a local chapter of Live Free, a Christian organization that has in recent years focused on preventing community violence, which now has new questions to answer, Walden said, about “the hate that caused this person to come into this community and create such a horrible, violent violation to our community.”

She said more resources are needed to counter hate in general and to cope with the reaction from Buffalo’s Black community. “When tragedy strikes and those things are not in place,” Walden said, “we create an environment that can become even more dangerous because people don’t know what to do to process their grief and their trauma.” Walden, 42, spoke with Religion News Service about her connections to the people who died on Buffalo’s East Side, who the community has lost and what it needs now.

The massacre on Saturday occurred at a grocery store in your neighborhood. How did you react to the violence that happened there?

I’m a seven-minute walk away from the grocery store. It’s our community store. We’re there regularly. As far as how I reacted, I think I’m still trying to figure that out. For me it was, how do I show up with and in my community, just being a resource and, hopefully, a person to bring some peace and love that are all much needed in this time. And just being as comforting to those who are closest to the pain from this as possible.

You were one of the officiants of a vigil on Sunday outside the Tops grocery store. What words did you find to say?

It was hard. I think we know that there’s a need for comfort. There’s a need for love in our community. And that was the word, reminding people that we are still a strong community; reminding those of us that live here that in spite of this heinous act that we’ve seen, this is still home. This is our home.

You helped notify family members of those who were killed. Was that an unexpected responsibility or have you done that in the past?

That is definitely an unexpected responsibility. I’ve done little bits of it in my clergy capacity. For our organization it’s completely different and completely new. And I’ve never had to show up that way in something so tragic, and also something that is so closely impacting me as well. 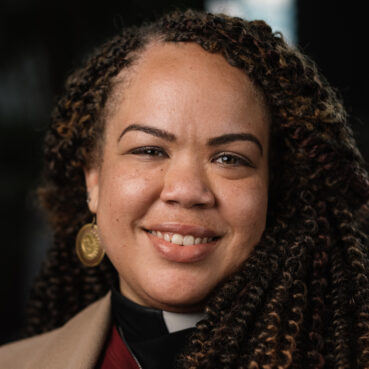 It must have been very difficult.

Difficult doesn’t even describe it. I don’t think that there are words that can describe what was felt by these families and especially when our community is already in such a deep period of grief just still coming out of the pandemic. And then to now have loved ones ripped away from (them) so violently. That’s very difficult news to deliver to anybody.

Some of those lost have been described as church mothers or community mothers and a deacon — people who may have helped others cope when something like this happens in their community.

They are some of the matriarchs and the pillars of our community. They will be missed in ways that I don’t think I can do justice to describing, but who bring joy to this community. They’re the ones who help stand and hold this community together. Check those of us that need to be checked when we need to be checked. They are such an instrumental part of our community. I know some of them have snatched up my kid, like, “Hey, young man, get it together.” That is a huge loss to our entire community.

How will faith leaders address the mental health needs that there are now?

One of the asks that Voice and our partners have been consistently making is for culturally responsive services — people who understand there is some generational trauma here. People that they can feel a sense of community and trust with. There are very big cultural dynamics at play here. We’re working really hard to coordinate faith effortsalongside mental health providers and we’ve had a call out for faith leaders who are also licensed in providing (such) services.

Is that clergy of color who would understand some of the cultural and long-term dynamics here?

Before the shooting, what were you planning to do this week?

I was getting ready to go to my sister’s graduation. She’s graduating with her second master’s degree and with honors. We were planning a great family Saturday to just all be together before I was leaving out of town. (But) I need to be here with my family. That’s my actual family, my husband and my children, but I also need to be here with my family that is my community. And so, for that reason, I won’t be traveling, and I’m grateful because she understands. How Blacks and Jews are bound together in ‘great replacement’ theory (RNS) — The man authorities say opened fire in a Buffalo grocery store Saturday (May 14), killing 10 mostly Black shoppers, was an avowed white supremacist. But his agenda went far beyond Blacks.

In the 180-page manifesto posted online two days before he carried out his attack, the 18-year-old gunman wrote that he chose the Tops Friendly Market on Buffalo’s east side because it is in an area with many Black residents. Eleven of the 13 people shot there were Black, law enforcement officials said.

Blacks, wrote Payton Gendron, come from a culture that sought to “ethnically replace my own people.”

But at the root of this xenophobic plan, known as replacement theory, are Jews to whom the alleged shooter devotes as much vitriol. Traditionally, Jews are depicted as stealth invaders who manipulate Western elites to disempower and replace white Americans.

Both Blacks and Jews are bound together in white supremacy, watchers of the movement say.

“You can’t separate the racism and antisemitism,” said Amy Spitalnick, executive director of Integrity First for America, the nonprofit that successfully sued organizers of the 2018 Unite the Right rally in Charlottesville, Virginia, where marchers chanted “The Jews will not replace us.”

“There needs to be some conspiracy responsible for everything terrible that these white supremacists think is happening to this country as a result of Black and brown people, immigrants and refugees,” said Spitalnick.

Dozens of pages in the Buffalo shooter’s manifesto are devoted first to Blacks and then to Jews, replete with photos, drawings, graphs and caricatures.

On Sunday and Monday, scores of American Jewish organizations loudly denounced the massacre, which the U.S. Justice Department is investigating as “a hate crime and an act of racially motivated violent extremism.”

The Anti-Defamation League, the National Urban League and others called on President Biden to convene a summit on hate and extremism and to develop a plan to combat hate crimes, white supremacy and violent extremism. The “great replacement theory” that binds racism and antisemitism was once an obscure extremist idea relegated to white supremacist forums. But in recent years it has become mainstream, especially as Fox TV host Tucker Carlson has made the Democrats’ intent to dilute the white voting population a central theme of his show. Several congressional Republicans have echoed it or outright embraced the notion.

At its root, the theory holds that not only is immigration to the United States crowding out whites, but that a cadre of elites, including Jews, are intentionally encouraging that to happen.

That charge is not new, said Samuel Perry, professor of sociology and religious studies at the University of Oklahoma and a leading expert on white Christian nationalism. It’s core to many authoritarian movements, stretching back to Nazi Germany.

The idea, said Perry, is that white people aren’t fertile enough and that it is “everybody’s responsibility to outbreed the negative elements we don’t want in our society,” he said.

“It’s wrapped up in ethno-cultural outsiders: immigrants, Jews and Muslims. They are a threat to white hegemony,” Perry said.

The theory appeared to go dormant for some years but resurfaced in Norway in 2011 when Anders Behring Breivik killed 77 people. In 2019 in New Zealand, Brenton H. Tarrant killed 51 people in a pair of mosques while warning of “white genocide.”

About 20% of Gendron’s manifesto appears to be plagiarized from the declaration left by the New Zealand shooter, according to an analysis conducted by the Khalifa Ihler Institute, a Sweden-based think tank that seeks to combat extremism, The Washington Post reported.

In the U.S., white supremacy has a long history that has lately reemerged in mass-shooting sprees such as the 2015 massacre of nine people at a Black church in Charleston, South Carolina. Gendron praised Dylann Roof, the Charleston shooter, in his manifesto. Roof, like Breivik, he wrote, “fought for me and had the same goals I did.”

Three years later, Jews were the target when Robert Bowers gunned down 11 worshippers at Pittsburgh’s Tree of Life Synagogue, because he thought they were working to admit immigrant “invaders” into the United States.

For whatever reason, the Buffalo gunman sidestepped Jews this time, writing, “They can be dealt with in time.”

But he hardly spared them.

“The Jews are the biggest problem the Western world has ever had,” the manifesto reads. “They must be called out and killed, if they are lucky they will be exiled. We can not show any sympathy towards them again.”

White supremacists view American Jews as liberal, stereotypically tied up with institutions, such as government, media and academia, that are viewed as left-leaning and secular.

American Blacks, who are overwhelmingly Christian, are also on the wrong side of politics in the minds of xenophobes. Tending to vote Democratic, they are thought to support immigration — and to be a danger to white culture in themselves.

In the manifesto, Gendron writes about Blacks nearly the same way as about Jews. “We must remove blacks from our western civilizations,” his screed said.

Many Jewish groups issued statements of solidarity with Blacks Monday.

“Today, our multiracial Jewish community sits in grief, extending our love, solidarity, and support to the Black community in Buffalo and all who are in pain,” wrote Jamie Beran, interim CEO of Bend the Arc: Jewish Action. “Tomorrow, we rise in partnership to hold the politicians and corporations profiting from the spread of dangerous conspiracies accountable.”

Many are hoping the two groups can come together to fight the onslaught of hate.

“There needs to be clear recognition that you can’t take on antisemitism without taking on the various forms of hate bound up in white supremacy,” said Spitalnick. “All of our lives are intertwined.”