850 religious leaders back lawsuit against DHS surveillance of pastor

RELATED: Pastor surveilled after ministering to migrants sues US government

Earlier this month, Manhattan pastor Kaji Douša filed a federal lawsuit accusing U.S. officials of violating her religious liberty by detaining and surveilling her over her ministry to migrants at the border.

Now, more than 850 ordained clergy from around North America have formed an interfaith coalition in support of Dousa, senior pastor of Park Avenue Christian Church.

“All of us feel as though this is an infringement on our right to preach and teach and lead,” said Rabbi Joshua Stanton of Manhattan’s East End Temple, who works with undocumented immigrants through the New Sanctuary Coalition movement that Dousa heads. “The idea that I could somehow be limited in who I could reach out to simply because of their country of origin or simply because of where they wanted the ceremony held is unfathomable. I couldn’t be a rabbi if that were the case.”

Stanton joined hundreds of leaders who signed an open letter in support of Dousa. Other signatories include faith leaders from the United Church of Christ, the Parliament of the World’s Religions, Yale Divinity School, Muslim Community Network, Jews for Racial and Economic Justice and hundreds of other houses of worship and organizations.

The coalition hopes to bring Dousa’s case to the limelight by advocating on her behalf to elected officials, said Corey Dukes from Protect Democracy, a nonpartisan nonprofit that is co-counsel in Dousa’s lawsuit and helped organize support for her.

On July 8, Dousa filed a lawsuit against the Department of Homeland Security, Immigration and Customs Enforcement and U.S. Customs and Border Protection after discovering that the agencies had listed her in a secret government database collecting information on the Central American migrant caravan traveling toward the U.S. border last fall.

Those actions, her supporters argue, have interfered with Dousa’s ministry and endanger all U.S. faith leaders.

“Migrants face a desperate situation at the Southern Border,” a statement from the coalition reads. “And the work that we do as clergy is crucial to them. We believe there to be a right for us to offer our pastoral services. … In this country, the government cannot decide to whom we may preach or with whom we may pray.”

Faith leaders from more than 40 states have added their names – and at one point, Dousa said, more than 50 clergy members were signing the letter every hour.

“I have been really strongly supported by the clergy community and the faith community in general,” Dousa said. “People very easily connect my story with what could happen to their pastor or their rabbi or themselves, and they’re mobilizing.”

Her lawsuit notes that U.S. officials had “collected detailed information about her and her pastoral work” and argues that placing her on the watchlist, part of a project dubbed Operation Secure Line, violated her First Amendment rights and the Religious Freedom Restoration Act.

The DHS did not offer comment on the pending litigation.

Dousa said she fears that other clergy could face the same treatment from the government that she has received.

“I believe that placing me as the only clergy person on Operation Secure Line was a way to test out the boundaries of what kind of surveillance they can do,” Dousa said.

When she reentered the U.S. in early January, federal immigration officials detained her for a secondary screening and interrogated her about her years of ministry near the border and in New York City.

“Rev. Dousa is one of the most respected religious leaders in New York and, I would argue, the United States,” Stanton said. “If the government is targeting her, I can’t help but think I’m in jeopardy and other religious leaders who look up to her are as well.”

Dousa, who is a member of the United Church of Christ, previously led a California church 20 miles from the Southern border.

Though she told Religion News Service that the possibility of continued surveillance has compromised her ability to minister to migrants with complicated immigration statuses, she has continued her advocacy work.

Earlier this month, Dousa helped lead the coordinated Lights for Liberty protests, in which thousands of demonstrators gathered in hundreds of cities to protest the Trump administration’s immigration policies.

“To reject a migrant is to cast away God’s angels, which I am unwilling to do,” Dousa said. “For this, my country has decided to punish me. But I will not look away. I will continue to look closely — to listen, to imagine and to call us into a better way. Free me and my colleagues to do our work with migrants and we will find that better way.” 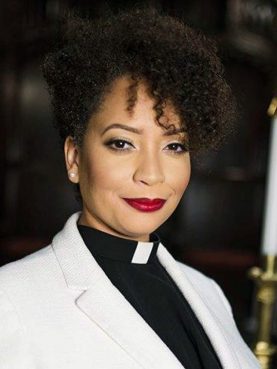