Sponsoring a Resonse to HIV/AIDS

Could child sponsorship help quell the tide of the AIDS pandemic? Rev. Jarvis Ward, National Facilitator of City and Missionary Communities for Mission America, thinks it can. Back in September I heard Ward speak at an HIV/AIDS workshop in New York City. He said child sponsorship is a manageable way for “people in the pew” to make a long term difference in the lives of those impacted by HIV/AIDS.

I attend a lot of academic seminars and was initially disappointed that the Movement Day workshop was more about child sponsorship through the relief organization World Vision than it was a seminar on HIV/AIDS. But then, I realized the goal wasn’t to fill attendee’s heads with facts; it was to actually make a difference in the lives of suffering people.

Ward was at Movement Day inviting church leaders to participate in the National Day of CARE: Hope Sunday Campaigns, an event he said is modeled on the National Day of Prayer, but with the goal of getting at least 50 congregations to sponsor 1000 or more orphans in Uganda, the nation where HIV/AIDS first emerged as a public health problem. It’s “soft launch” is scheduled for December 4, 2011 to coordinate with World AIDS Day, which is today.

When I interviewed Ward after he spoke, he explained his commitment to World Vision, in part, by saying, “If we eliminated AIDS with a vaccine today and all the people who were destined to die in the next couple of days would not, one thing would remain: they would still be poor, and without [adequate] housing or health care.”

“The desires of the heart are hunger pains that drive our action,” Dr. Scott Todd, an immunologist and former director of Compassion International’s AIDS Initiative, writes in his new book, Fast Living: How the Church Will End Extreme Poverty. And, “Jesus didn’t come to make sure we wouldn’t be hungry—He came to make sure we were hungry for the right things.”

Todd developed an insatiable hunger to act on extreme poverty after an encounter with a 12 year old Tanzinian girl who died unnecessarily of AIDS. The girl’s name was Jacqueline and both her parents had died of AIDS before her.

“The day I visited Jacqueline, she was lying on a mat outside her grandmother’s mud hut. Her HIV infection had spread with unexpected speed, dismantling her immune system and leaving her defenseless to a host of other infections,” Todd writes. “I knelt in the crusted dirt at Jacqueline’s side and prayed for her. I prayed with optimism because just the day before a local Christian hospital agreed to provide those lifesaving medicines for fifty-three children.”

The following day Todd left Africa. When he arrived home, he received the message that Jacqueline had died and vowed to do everything in his power to never be too late again.

“I’m not the only one who bears the burden of Jacqueline’s death,” he says. “The loss is not ‘theirs’ or ‘mine.’ It is our loss. We all bear this burden.”

Todd now serves as senior ministry advisor in the president’s office at Compassion. He says that extreme poverty has been cut in half in one generation and we have the capacity to finish the job in ours. In 1981, for example, 52 percent of the world’s population lived on less than $1 per day, but by 2005, that number had been reduced to 26 percent.

“If there is anything that exposes the lies of poverty it is the gospel,” he says. “But the gospel proclaimed is not enough. Disenfranchised people need the whole gospel–in action as well as words. They need Jesus’ spoken truth and they need his disciples to live it. They need to see the muscles of the gospel flex, expressing love in gritty, persevering, intelligent, effective action.”

The church is better equipped to deal with extreme poverty than governments or businesses, though both have important roles to play, he says in Fast Living, but too many Christians have been paralyzed into inaction by the mistaken believe that Jesus was speaking prophetically when he told the disciples the poor would always be with them.

“A lie was born,” Todd writes. “A fatalistic belief that has fed lethargy while many millions of children starved. We took Jesus’ words to Judas and used them to enshrine our anemic expectations for the world’s poorest people.”

He argues instead that Jesus was simply defending Mary (who had poured expensive perfume on Jesus’ feet), confronting Judas’ greed, and making the point that the disciples would always have opportunities to help the poor, but their time with him was short.

He says many of us also wrongly believe that when Jesus and other biblical writers talk about “the poor,” they are speaking metaphorically about every kind of human brokenness. He says this misreading has dire consequences.

“If we are all poor, then the condition of poverty is unsolvable until Jesus returns, and anti-poverty organizations can expect to be in business for a long, long time.”

Therefore, he uses the words poverty and poor to refer only to those who live on less than $1.25 per day. “Our goal, based on that definition, is to expect the end of extreme poverty,” he says. This will happen when we “create a new culture of effective Christian generosity” by making poverty personal and taking “credible action” on behalf of the poor. And, on behalf of those who have been impoverished by HIV/AIDS. 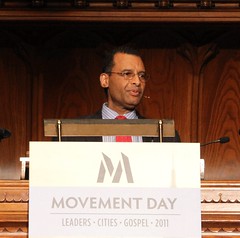