You’ve seen ‘The Rings of Power,’ but have you heard of this tiny museum housing J.R.R. Tolkien’s treasures? Wheaton College has an open library commemorating Tolkien and the “Lord of the Rings” universe, formally known as the Marion E. Wade Center, at the college in Wheaton, Illinois. RNS Photo by Emily Miller

WHEATON, Illinois (RNS) — It started with an inkling.

It was the 1950s. Clyde S. Kilby, then an English professor at Wheaton College, had a feeling about a British author he’d been reading named C.S. Lewis — that he was “probably going to be famous one day,” according to Crystal Downing, co-director of Wheaton’s Marion E. Wade Center.

So Kilby wrote to Lewis and started collecting books and letters written by the author. He met some of Lewis’ friends and family.

Years later, he was traveling to England to work with Lewis’ Oxford University colleague J.R.R. Tolkien on “The Silmarillion,” a collection of stories that fill in the background of Tolkien’s beloved “Lord of the Rings” trilogy.

Decades later, the professor’s collection of letters and books has grown to become the Marion E. Wade Center, one of the foremost research centers not only on Lewis, but also Tolkien and five other British Christian authors who had influenced Lewis’ work.

Now the Wade Center is preparing for an influx of archival materials and interest as Tolkien and his fantasy world of Middle-earth have once again grabbed the spotlight.

RELATED: Tolkien fans hope to turn his house into a ‘Rivendell’ for writers and filmmakers

After years of speculation, the first two episodes of “The Rings of Power” — the multimillion dollar prequel series produced by Amazon Studios and inspired by the appendices to Tolkien’s “Lord of the Rings” novels, debuted Thursday night (Sept. 1) on Prime Video, Amazon’s streaming service.

“Tolkien probably would never have gotten published if it weren’t for Lewis,’” Downing said.

“And, of course, Lewis wouldn’t be famous if it weren’t for Tolkien because Tolkien is the one who convinced him he could be a Christian.”

The Wade Center can feel like the evangelical Christian college’s best-kept secret, housed in a cozy building that looks like a stone English cottage nestled into Wheaton’s suburban Chicago campus. But Laura Schmidt, archivist and Tolkien specialist at the center, said, “Tolkien knew about Wheaton College. He knew about the Wade Center.”

Pre-pandemic, the Wade Center welcomed about 10,000 people a year, ranging from elementary students from Chicago-area school districts to scholars from around the world.

Among its treasures are rare, autographed first editions of Tolkien’s “Lord of the Rings” trilogy and “The Hobbit,” all featuring cover artwork designed by the author himself. 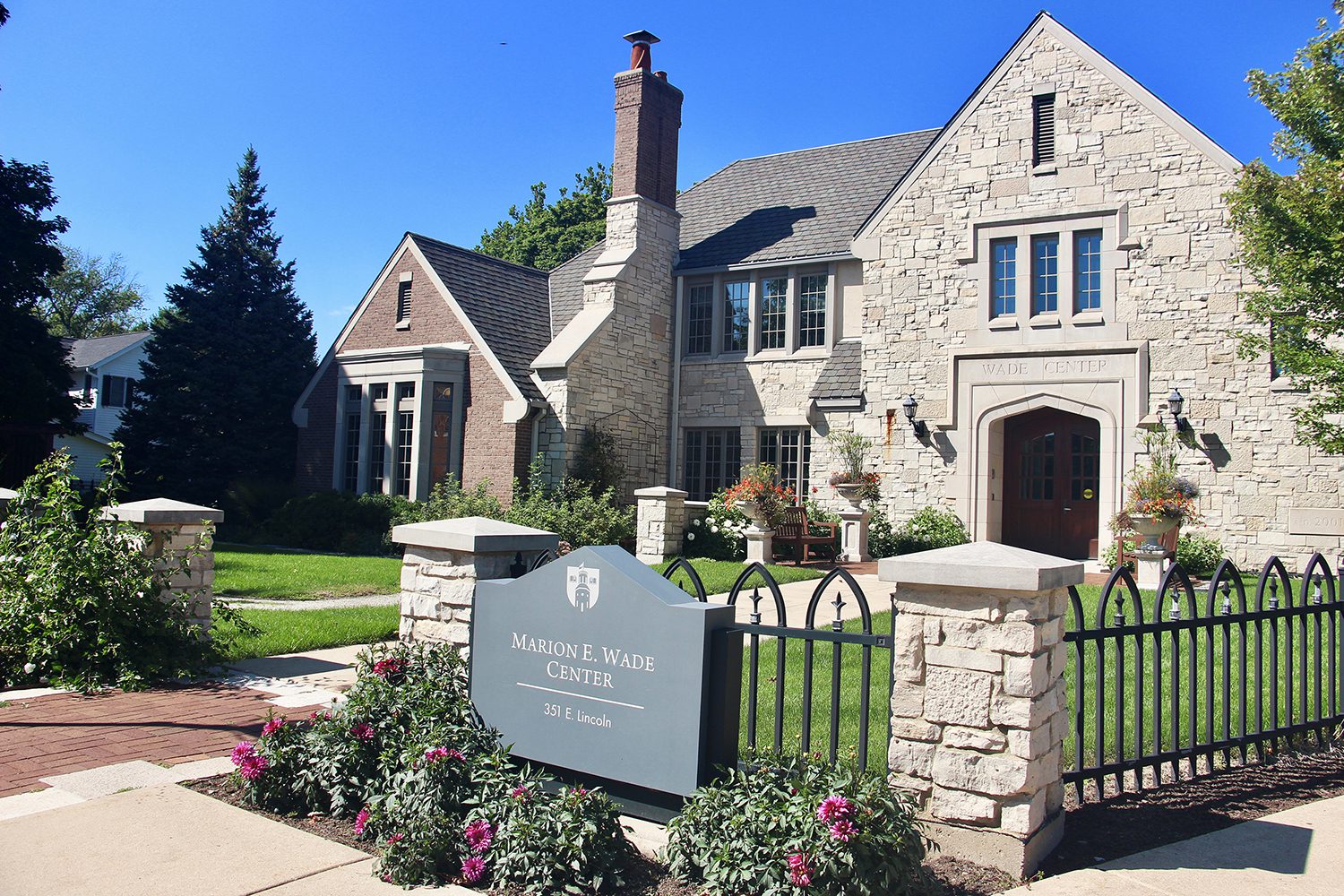 Marion E Wade Center, home to the Tolkien Library, is housed on the campus of Wheaton College in Illinois. RNS Photo by Emily Miller

An exhibit in the museum shows how those covers have changed over time, from Tolkien’s artful eye of Sauron circled by Elvish script to a 1980s paperback featuring an Olan Mills-style portrait of the dwarf Gimli and elf Legolas with flowing, romance-novel hair.

Another exhibit atop the dining room table from Lewis’ house displays merchandise that accompanied the popular “Lord of the Rings” films released in the early 2000’s and more recent films based on “The Hobbit.” There is a Lego scene of The Shire; a letter opener made to look like Bilbo Baggins’ Elven sword, Sting; even a board game.

The museum also features the small, nearly hobbit-sized desk at which Tolkien wrote “The Hobbit” and much of “Lord of the Rings,” as well as the dip pen he used to write, slightly melted on the end he used to tamp his pipe tobacco. Its most popular attraction, though, is the wardrobe carved by Lewis’ grandfather that inspired his beloved children’s story “The Lion, the Witch and the Wardrobe.”

Yes, there are fur coats inside.

On Tuesday, scholars from Ireland and Australia perused texts in the reading room, home to at least one copy of every book published by the seven Wade authors, as well as nearly everything ever published about them.

Meanwhile, across campus, members of the Wheaton College Tolkien Society shared their plans for watching “The Rings of Power” while manning a table at Wheaton’s club and ministry fair. The series had yet to premiere, and members were feeling both excited and apprehensive. 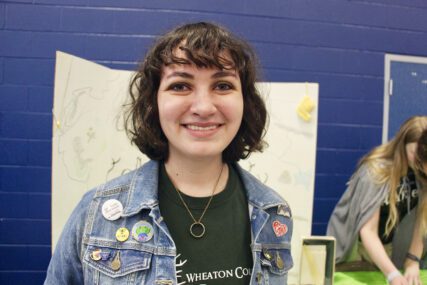 Elizabeth Church, president of the Wheaton College Tolkien Society, was one of several students helping to run a booth about the club at the school’s Club and Ministry Fair. RNS Photo by Emily McFarlan Miller

Tolkien Society President Elizabeth Church said that what drew her to Tolkien’s stories was the “found family aspect.” In the “Lord of the Rings” series, the Fellowship of the Ring brings together hobbits, elves, dwarves, humans and others for a single purpose: to destroy the one ring and defeat evil.

Church has found a similar family in Wheaton’s Tolkien Society, she said.

“We’re very much like the fellowship in the books in that we are a ragtag bunch of people who come together for one goal, which is to be a fellowship,” the senior said.

The first two episodes of “The Rings of Power” set up an epic battle between good and evil. In one of its opening scenes, a young Galadriel, who will become the elven Lady of Lórien in “Lord of the Rings,” questions how to recognize the light when evil masquerades as good.

The answer comes near the end of the episode: “Sometimes we cannot know until we have touched the darkness.”

Light and dark, good and evil are themes found throughout Tolkien’s work, Schmidt said before watching the new series.

And Schmidt, who advises the Tolkien Society, expects the series to get dark. The Marion E. Wade Center at Wheaton College includes a wide variety of memorabilia including cards, miniature swords and other decorations symbolic of “The Hobbit” and “The Lord of the Rings” series. RNS Photo by Emily McFarlan Miller

It’s drawn from writings set before the events of “Lord of the Rings,” when the evil sorcerer Sauron is handing out what Schmidt jokingly called “friendship rings” to men, dwarves and elves that he’ll later use to control Middle-earth. It’s a long time before the conclusion of “The Return of the King,” the final book in Tolkien’s series, when good ultimately triumphs over evil.

Those themes are also part of the reason why the author’s work not only endures nearly 70 years after it first was published, but also has inspired what has been called the most expensive TV show ever made.

“I think that’s going to really resonate with people in this time and era now, because there’s a lot of darkness that we’re trying to figure out. That’s why these books are pertinent to our time, and it’s going to, hopefully, inspire hope in people’s hearts that the fight is worth fighting,” Schmidt said.