Four years after the assassination of Martin Luther King, Jr., the novelist James Baldwin would write on the pages of Esquire magazine, “Since Martin’s death, in Memphis, and that tremendous day in Atlanta, something has altered in me, something has gone away.”

Baldwin wrote about how “the act of faith” – that is, his belief that the movement would change white Americans and ultimately America – maintained him through the years of the black freedom movement, through marches and petitions and torturous setbacks.

After King’s death, Baldwin found it hard to keep that faith.

Nearly two weeks after King’s funeral, in April of 1968, King’s confidant and former strategist Wyatt Tee Walker tried to renew this faith. Drawing on a tradition of black faith, Walker encouraged a grieving community to embrace hope even in the face of despair.

As a scholar of religion and American public life, I recognize the important lessons Walker offers for current times when America is deeply divided.

Black public faith has a storied place in American life.

The black church has been a place of fellowship and affirmation from colonial America to modern day, empowering individuals to undertake public acts to transform politics and society.

The 19th-century National Negro Convention movement, which ran from 1831 to 1864, demonstrated this black faith in action. Its leaders advocated for the abolition of slavery and full citizenship for African Americans. One activist reflected years later that the “colored conventions” were “almost as frequent as church meetings.”

The civil rights movement carried this faith in action forward. Theologian Dwight Hopkins has written how the sermons and songs of black faith empowered and sustained African Americans, even in bleak times.

These practices on Sunday morning, he noted served to “recharge the worshipers’ energy” so they could deal with the “rigors and racism of ‘a cruel, cruel world’ from Monday though Saturday.”

It was this faith that empowered many African Americans to maintain their faith in the possibilities of democracy while facing entrenched white opposition to their civil rights. Marches, sit-ins, demonstrations and mass meetings were all public displays of black faith.

The risk of faith

In the wake of King’s assassination, the words of his last published book, “Where Do We Go From Here? Chaos or Community,” reverberated throughout the nation.

Urban rebellions erupted in the wake of King’s death. With parts of over 100 cities smoldering or in ruins, chaos seemed a more likely future in 1968 America than community.

In a sermon called “Faith as Taking the Risk,” delivered at Princeton Theological Seminary, Walker sought to address a question posed by a young theologian James H. Cone after King’s death: “Without King, where was the hope?”

Deftly navigating the tension between hope and despair, Walker based his message on the response of the Hebrew prophet Elisha in the Book of Kings who faced crisis and despair with an invading Syrian army, widespread famine and people ready to give up.

Drawing inspiration from the faith of the community, Elisha encouraged the community to keep faith in their nation.

Elisha’s example powered Walker’s message. At Princeton, Walker encouraged the black seminarians not to countenance a nostalgia for the past. In moments of deep discouragement, Walker said, distressed people tend to retreat into a romanticized past.

“In the jargon of the street,” Walker said, “it sounds like this: ‘Child, don’t you wish it was like it was back in the good old days… .”

“And yet,” he declared, “not by any wishing or hoping or praying or anything else can we find any day when things were better. There was no such day!”

Walker proceeded to caution his audience against maintaining the status quo. Walker proclaimed, “Whatever dream of life it is we envision for our children, ourselves, our community, our church, we will never bring it to our fingertips unless it begins first with some initial risk.”

For Walker, challenging the status quo was a fundamental aspect of existence.

“The elemental character of life is one that is moving and dynamic,” he said.

Walker closed his sermon by urging the audience to embrace hope-filled struggle. But he did not deny the desperate reality.

Instead, in the face of despair, he urged the young seminarians to take a risk of faith and build a future that has not been. For Walker, that meant “doing, trying, moving toward things which have never been tried before.”

The lasting testament of black public faith is its affirmation of new possibilities during moments of deep doubt. Rather than relying on a myth of the past or upholding the status quo, Walker offered the seminarians at Princeton a new vision of a political community.

“What I’m saying to you,” Walker declared, “is that I have the ultimate faith that we are going to find a tranquility with justice in this nation, in this world. We must! And it is conceivable it could happen in our time.”

Many Americans are angry with the state of the political system. And acts of racial bigotry and religious intolerance have become far too ordinary.

In such times, Wyatt Tee Walker’s words can remind people to muster hope and keep faith with the possibilities of American democracy while continuing the struggle for a just society. 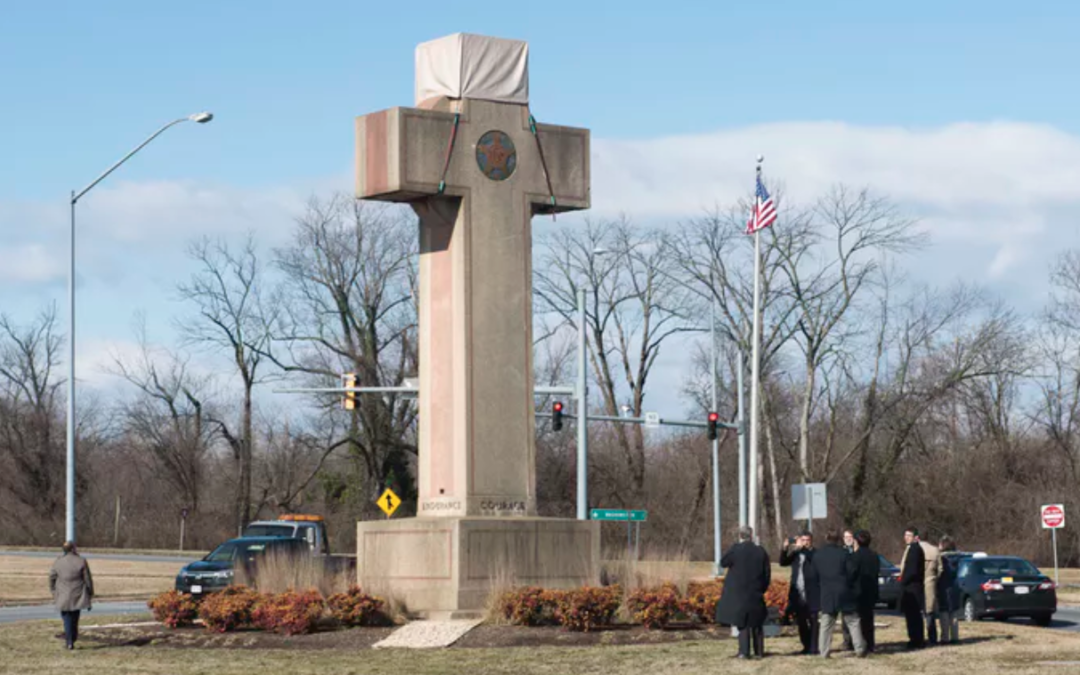 The Supreme Court recently heard arguments in a case regarding the constitutional validity of a war memorial in Maryland in the shape of a Christian cross. The memorial is known as the Bladensburg Peace Cross and stands on government property. At issue in the case is a 40-foot cross erected as a memorial for those who died in service during World War I. The Supreme Court is expected to rule on the case later this summer.

Constitutional law scholar Garrett Epps notes that the result from this case “may help resolve disputes over local memorials around the country.” It might also tell us something about the approach of a new conservative Supreme Court.

While the case underscores the ongoing conflict over the place of religion in American public life, as a scholar who studies this area, I believe there is more to understand here. This is not the first such conflict. In a diverse society, these symbols can have meanings that go beyond religion.

History of the memorial

To highlight these different meanings, let’s consider the history of the Bladensburg Peace Cross.

The memorial sits on public land, at the center of a busy intersection in Prince George’s County, in Maryland.

In 1919, a local group of citizens including 10 mothers who lost their sons in World War I formed the Prince George’s County Memorial Committee. Together with the Good Roads League of Prince George’s County, they launched an effort to memorialize those who died in service during the war. In 1922, American Legion Post 3 volunteered to join the effort to build the memorial.

The memorial effort set out to dedicate the highway between Bladensburg to Annapolis as the “National Defense Highway.” It also decided that a memorial cross be included at the beginning of the highway. The intent behind the design was to invoke “patriotism and loyalty to the nation” as well as, in the words of treasurer of the Memorial Committee, to serve as a “grave stone” for her son.

Donors who supported this the initiative signed a pledge which stated,

“We, the citizens of Maryland, trusting in God, the Supreme ruler of the universe, pledge faith in our brothers who gave their all in the world war to make the world safe for democracy. Their mortal bodies have turned to dust, but their spirit lives to guide us through life in the way of godliness, justice and liberty. With our motto, ‘One God, One Country and one Flag,’ we contribute to this memorial cross commemorating the memory of those who have not died in vain.”

The memorial was dedicated on July 12, 1925. A plaque on the memorial is inscribed with the names of 49 soldiers from Prince George’s County who died in the war.

In 2014, three citizens filed a suit in the District Court of Maryland claiming that the display of a massive Christian cross on public property was a violation of the Establishment Clause of the First Amendment of the United States Constitution.

In 2017, the case went to the U.S. Court of Appeals for the Fourth Circuit in Virginia. In a ruling, the judges said that the cross “has the primary effect of endorsing religion and excessively entangles government in religion.”

This wasn’t the first war memorial in the shape of a cross that was legally challenged. For over a quarter century, the Mount Soledad cross in La Jolla, California, was subject to litigation.

The Mount Soledad cross is a 43-foot cross which was once on publicly owned land. In 1989, a Vietnam War veteran filed suit against the city of San Diego in U.S. District Court over the presence of a religious symbol on public property. In 1991, the court ruled the cross was “unconstitutional and had to be moved off public land.”

The 1991 ruling led to a series of appeals in the federal court system that spanned decades. To end the protracted and ongoing legal drama, the Mount Soledad Memorial Association agreed to purchase the public land beneath the cross.

As a result, in 2016, the Ninth U.S. Circuit Court of Appeals issued a one-page ruling that ended all litigation since “the central issue – a religious symbol standing on government property – was moot.” In other words, since the cross was now on private property, the issue was resolved.

In response to the litigation involving the Mount Soledad cross, the U.S. House of Representatives passed the War Memorial Protection Act in 2012. Sponsored by California Rep. Duncan Hunter, the legislation permits the inclusion of religious symbols on official military memorials.

Upon passage by the House, Hunter stated, “Across the country and beyond our shores, America’s military and veterans are proudly represented by war memorials that also display symbols of personal faith and religion.”

Though not law, the passage of the bill by the House demonstrates the extent of the conflict around the presence of religious symbols in American war memorials.

Both people of faith and those who are non-religious can feel uncomfortable with memorial crosses. For example, Daniel Headrick, an associate pastor, lawyer and 2018 fellow of the Baptist Joint Committee for Religious Liberty, writes, “To reduce the cross to a symbol memorializing war sacrifice is a quintessentially American act, but such a meaning is profoundly at odds with the theological significance of the cross.”

In other words, Headrick doesn’t believe a cross can be stripped of its religious meaning.

In a religiously plural democracy, war memorials with religious symbols can have different meanings for different citizens. These different meanings can be a source of conflict. Perhaps for this reason, the 19th-century French observer of American democracy Alexis de Tocqueville warned of the political effects when religion gets “mixed up with the bitter passions of the world.”

The Bladensburg Peace Cross case like the Mount Soledad Cross and the War Memorial Protection Act are present-day reminders that there is always more than one meaning of religious symbols.