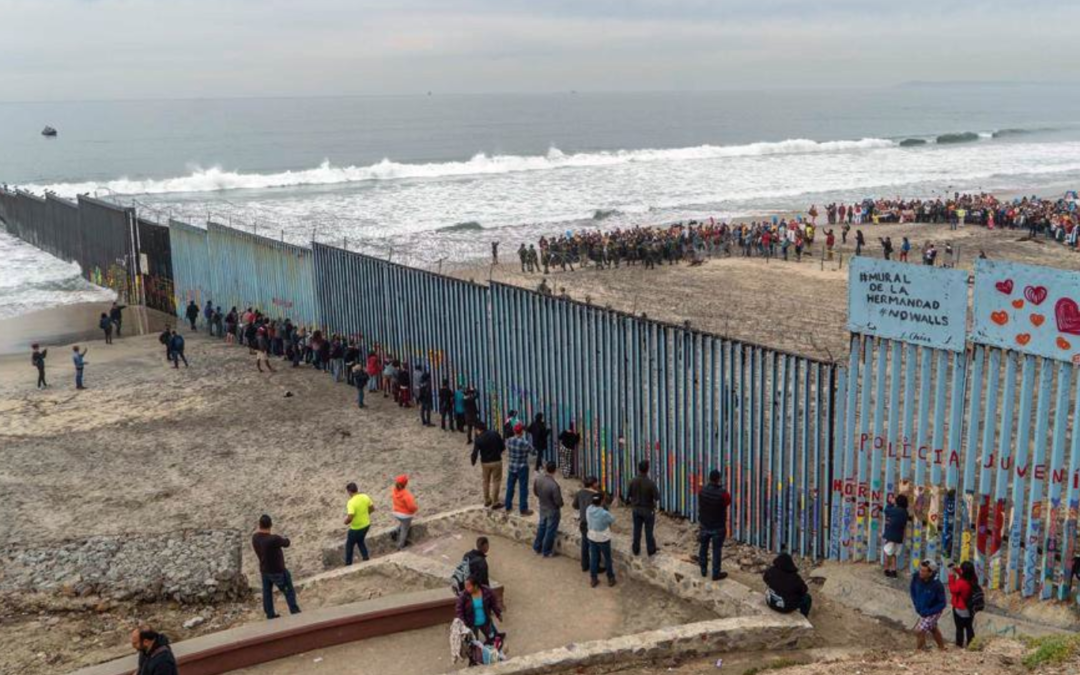 Seeing Jesus in the Migrants at the Border

The devastating picture of Óscar Alberto Martínez Ramírez and his 23-month-old daughter, Valeria, lying face down in the muddy waters of the Rio Grande jolted the nation awake last week.

We could no longer look away.

The tragedy of a father and daughter from El Salvador drowning while he tried to save her from being swept away by the strong river current reminded the nation of the horror of the unfolding humanitarian crisis at the border.

We must see them.

Martínez was leading his family from El Salvador to legally seek asylum in the United States.

But he was not able to get through the long wait at the border crossing, so he sought to swim the Rio Grande, stand on American soil, turn himself and his family in to Border Patrol and ask for asylum there.

All of that is legal.

But the river took them before they had a chance. The bodies of Salvadoran migrant Óscar Alberto Martínez Ramírez and his nearly 2-year-old daughter, Valeria, lie on the bank of the Rio Grande in Matamoros, Mexico, on June 24, 2019, after they drowned trying to cross the river to Brownsville, Texas. Martínez’s wife, Tania, told Mexican authorities she watched her husband and child disappear in the strong current. (AP Photo/Julia Le Duc)

Martínez and his daughter were not the only migrants to die this week. A 20-year-old migrant woman and three small children were found dead in the desert near McAllen, Texas, having succumbed to the searing heat.

In addition to these deaths, the news from last weekend of migrant children held in detention in Border Patrol stations in unsafe and unsanitary conditions, without access to soap, toothbrushes, diapers or proper care, rightly caused an outcry from the public. Instead of the border security debate dominating the immigration headlines, Americans are now more fully seeing the human suffering of desperate migrants fleeing from home to a country that they hope will be a place of refuge.

The numbers of migrants coming are staggering.

The month of May saw almost 133,000 apprehensions at the U.S. southern border, with 96,000 consisting either of family units or unaccompanied children. The large numbers of migrants now turning themselves in to Border Patrol and asking for asylum has overwhelmed our system.

Our laws require that we hear and process asylum claims and that anyone who sets foot on U.S. soil can claim asylum, but with the government’s primary focus being on zero tolerance, deterrence, security, detention, deportation and keeping migrants away from the border, the number of families and children presenting themselves for asylum is too much to properly administer.

The Border Patrol is overwhelmed and chaos has ensued.

Hearing these stories this week reminded me of what I’ve seen in my own trips to the border in the past year, most recently to El Paso less than two months ago.

There, I connected with a network of churches receiving from U.S. Immigration and Customs Enforcement hundreds of asylum-seeking migrants a day. The churches gave the migrants food and drink and provided a temporary place to rest before they continued their journey to join family in other parts of America.

I’ll never forget seeing the hollow eyes on the faces of exhausted migrants huddled on cots in a church sanctuary that had been haphazardly turned into a migrant shelter in El Paso.

When I arrived, I was told that these migrants had been released by ICE that day to the church. It was midafternoon, but what struck me was that they were so very tired. They sat in the quiet church worship hall in silence. Some slept. Some just sat and stared. Babies didn’t even cry. Mothers held their children close and just looked ahead. No one said a word. No laughter, no conversation. No crying of the children. Just silence. They were all so tired.

I was told by the pastors of the church that many of the migrants who came to them day after day suffered from violence, rape, extortion and threats of being forced into drug gangs. Many of them saw loved ones murdered and they lived under threats of death at the hands of cartels and drug gangs.

Corrupt police and government officials could not protect the poor who were being used and extorted in these countries that are descending into lawlessness.

Yet, prayers from the pastors, shelter, food, love, hospitality, concern, and being received and embraced as fully human encouraged them greatly.

The work of Catholic, mainline Protestant and evangelical churches along the border over the past several months has been immense. I’ve seen with my own eyes, and through my research with the Evangelical Immigration Table, churches engaging in this hard but needed work of receiving migrants in San Diego-Tijuana; Nogales, Ariz.; El Paso, Texas; and elsewhere. These churches truly are being the hands and feet of Jesus.

But the other side of the work of the church is that it is often fellow Christians who come to the border from the south and make their way across.

I’ve heard from multiple sources that the majority of the migrants coming from Central America are evangelical Christians. I was told by a church shelter manager in Las Cruces, New Mexico, that as many as 75 percent of the migrants they served were evangelicals. Others in El Paso said the proportion of evangelical migrants was well over 50 percent. In significant ways, the ministry of receiving migrants by churches at the border is the ministry of the church embracing Christ himself.

Not long ago, a Nazarene pastor friend of mine was invited to meet with a group of asylum-seekers at the border. Among them was a man named Oscar and his little girl. He had fled to the U.S. to keep her safe. They shared a meal and then Oscar, who said he was part of an evangelical church, told my friend something profound.

We are family. We are brothers.

Was this the same Oscar? What matters is what the asylum-seeker my friend met said.

John Garland, pastor of San Antonio Mennonite Fellowship, has also recently written that approximately 80 percent of the migrants that his church receives are evangelical Christians.

I write this not because I think that evangelical Christians have more value than people of other religions or no religion at all, but because I think it is important for American Christians to know that the migrants coming to us are also our brothers and sisters in Christ.

I believe that Jesus sees these desperate people. I believe they matter to him.

Jesus saw Óscar and Valeria. Jesus saw the woman and the three little children who died in the desert. He sees all of the crowds of migrants, harassed and helpless and fleeing from a home where they are no longer safe to journey to a place they have never been.

He wants us to see them too.

Can we, like Jesus, be moved with compassion for the crowds of migrants coming to us? Can we pray for them and weep for migrants like Óscar and Valeria?

(Alan Cross is a Southern Baptist pastor and author of “When Heaven and Earth Collide: Racism, Southern Evangelicals, and the Better Way of Jesus.” He advocates on behalf of immigrants and refugees from a biblical perspective with the Evangelical Immigration Table. The views expressed in this commentary do not necessarily reflect those of Religion News Service.)