Companies survive and thrive by capitalizing on social movements 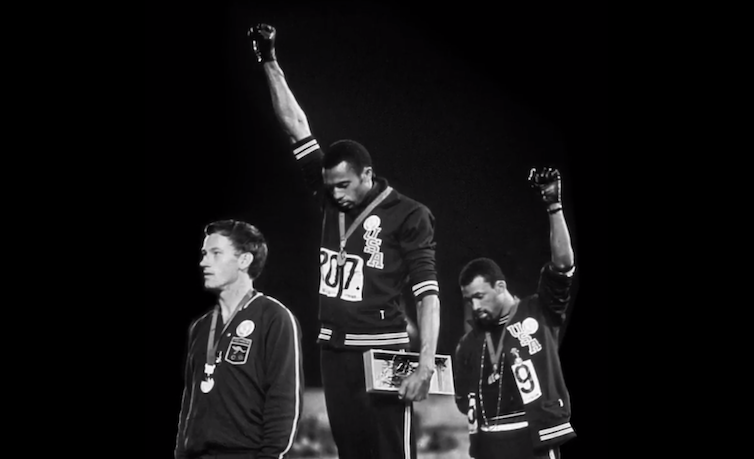 Now 50 years later, sportswear manufacturer Puma has launched a commemorative line of footwear to celebrate Tommie Smith’s bravery and the impact of his actions.

When African-American athletes Tommie Smith and John Carlos famously raised their fists from the medal-winners podium at the Olympic Games in Mexico City, October 1968, many saw this as a “black power” salute. Smith always said it was a “human rights salute,” but regardless, he and Carlos were expelled from Mexico City for failure to represent the Olympic ideal. Smith, who won the gold medal and set a new world record in that race, never competed again.

Now 50 years later, sportswear manufacturer Puma has launched a commemorative line of footwear to celebrate Smith’s bravery and the impact of his actions. The centerpiece of the line is a casual suede shoe virtually identical to the one Smith held in his unraised left hand in 1968, with profits from shoe sales going to charities supporting equality.

Puma’s anniversary campaign comes just over a month after rival footwear company Nike featured NFL player Colin Kaepernick in its own campaign celebrating the 30th anniversary of Nike’s “Just Do It” slogan. Kaepernick spent much of 2017 using his status as a professional football player to raise awareness of human rights issues – specifically, racial injustice and police brutality in the US. While Smith raised a fist during the national anthem, Kaepernick took a knee. Like Smith, Kaepernick’s high-profile protest may have ended his career: he has been unemployed since the end of the 2017 season. Appropriately, Kaepernick’s tagline in the Nike campaign is: “Believe in something. Even if it means sacrificing everything.”

While both Kaepernick and Smith demonstrated that they are willing to sacrifice everything fighting for what they believe, could the same be said of Nike and Puma? Are these companies also willing to put principles ahead of profits and risk everything to take a stand on highly divisive social issues? No, of course they aren’t.

Nike and Puma, and other companies that take a stand on controversial social issues leverage the interest in these social movements to generate profits. Few companies understand how to create customer and brand value better than Nike and Puma. They have gauged their customers’ sentiment and are using this to forge new corporate social opportunities. From entry into new markets, engaging new customers or increasing brand awareness, the business case behind social opportunities increasing profits can be very strong.

What makes campaigns like this controversial is the human element. Nike is taking a stand on racism and social division because the company has decided that’s what its consumers and employees care about. Many may not remember that Nike celebrated the 25th anniversary of its “Just Do It” slogan only five years ago. Under the title “Possibilities”, this anniversary campaign challenged people to set goals and to do things they’d never done before, with a video that featured famous and everyday athletes doing extraordinary things narrated by Bradley Cooper. Racism and social injustice were problems in 2013, too, of course: George Zimmerman was acquitted of killing black teenager Trayvon Martin just a month before Nike’s campaign launched.

While Nike’s 30th anniversary of the campaign includes a similar montage of famous and everyday athletes, the tone is very different. Kaepernick is the narrator, and the theme is that they all “leverage the power of sport to move the world forward”. Times change. Opportunities change.

This doesn’t make these companies evil or hypocritical. It’s about opportunity. Starbucks has benefited from its partnership with Conservation International through which it works with rural farmers in developing countries that grow and sell fair trade coffee. Tesla has become a US$50 billion company thanks to changing consumer sentiment around electric cars and generous government subsidies. Walmart has also benefited from changing sentiment and government subsidies, investing more in on-site solar facilities than any other US company in the past few years. And it’s very clear about why: “At Walmart, renewable energy is about our customers and helping them save money so they can live better.”

Why would we negatively judge companies that capitalize from human-centered social issues? Companies survive and thrive by capitalizing on business opportunities. Certainly, there are risks for the companies: they may have misread the business case and these investments may end up hurting in the long-run. All companies occasionally make bad investments. But that’s not their expectation. Nike, Puma, Unilever and others who tie their fortunes, short or long-term, to social movements believe they are acting in the best interests of their stakeholders while seizing an opportunity to make their companies better. If a consequence is that society becomes a better place as a result, then that’s OK too.