Haitian President Jovenel Moïse was assassinated in the early morning hours of July 7, 2021, in a brazen attack on his private home outside Port-au-Prince, the capital.

Moïse’s wife was also shot in the assault that killed her husband. The assailants have not been identified, and Haiti’s prime minister reports he is running the country.

Jovenel Moïse, 53, was born in 1968, meaning that he grew up under the Duvalier dictatorship in Haiti. Like most Haitians today, he lived through turbulent times – not only dictators but also coups and widespread violence, including political assassinations.

Moïse, a businessman turned president, made his way into politics using political connections that stemmed from the business world. Initially he invested in automobile-related businesses, primarily in the north of Haiti, where he was born. Eventually, he ultimately landed in the agricultural sector – a big piece of the economy in Haiti, where many people farm.

But the business brought Moïse prominence. It was as a famed banana exporter that Moïse met then-Haitian President Michel Martelly in 2014. Though he had no political experience, Moïse became Martelly’s hand-picked successor in Haiti’s next election.

Martelly was deeply unpopular by the end of his term, but party leaders assumed that Moïse would be more welcomed given his relatable background in farming.

A divisive and unstable presidency

Instead, Moïse barely eked out a win in a November 2016 election that fewer than 12% of Haitians voted in. His meager electoral victory came after two years of delayed votes and confirmed electoral fraud by Martelly’s government.

In 2017, Moïse’s first year in office, the Haitian Senate issued a report accusing him of embezzling at least US$700,000 of public money from an infrastructure development fund called PetroCaribe to his banana business.

Protesters flooded into the streets crying “Kot Kòb Petwo Karibe a?” – “where is the PetroCaribe money?”

Lacking the trust of the Haitian people, Moïse relied on hard power to remain in office.

He created a kind of police state in Haiti, reviving the national army two decades after it was disbanded and creating a domestic intelligence agency with surveillance powers.

Since early last year, Moïse had been ruling by decree. He effectively shuttered the Haitian legislature by refusing to hold parliamentary elections scheduled for January 2020 and summarily dismissed all of the country’s elected mayors in July 2020, when their terms expired.

Sustained protests – over gas shortages and blackouts, fiscal austerity that has caused rapid inflation and deteriorating living conditions, and gang attacks that have killed several hundred, among other issues – were a hallmark of Moïse’s tenure.

Existing street protests exploded in early 2021 after Moïse refused to hold a presidential election and step down when his four-year term ended in Feburary. Instead, he claimed his term would end one year later, in February 2022, because Haiti’s 2016 election was postponed.

Before his death, Moïse planned to change the Haitian Constitution to strengthen the powers of the presidency and prolong his administration.

Memories of a dictatorship

For months before his assassination, Haitian protesters had been demanding Moïse’s resignation.

Both Papa Doc and Baby Doc relied on murdering and brutalizing Haitians to remain in power, with the unspoken approval of Western political interests in Haiti. Working with the Duvaliers, U.S. manufacturers in Haiti ensured that their investments were profitable by pushing for wages to remain low and working conditions to remain poor.

When mounting Haitian protests ended the regime in 1986, Baby Doc fled the country. The Duvaliers had enriched themselves, but Haiti was left in economic collapse and social ruin.

The 1987 Haitian Constitution that Moïse sought to change was written soon after to ensure that Haiti would never slide back into dictatorship.

Beyond Moïse’s use of state violence to suppress opposition, anti-Moïse protesters before his killing pointed out another similarity with the Duvalier era: the United States’ support.

In March, the U.S. State Department announced that it supported Moïse’s decision to remain in office until 2022, to give the crisis-stricken country time to “elect their leaders and restore Haiti’s democratic institutions.”

That stance – which echoes that of Western-dominated international organizations that hold substantial sway in Haiti, such as the Organization of American States – sustained what was left of Moïse’s legitimacy to remain president.

Haitians unhappy with continued American support for their embattled president held numerous demonstrations outside the U.S. embassy in Port-au-Prince, while Haitian Americans in the U.S. protested outside the Haitian Embassy in Washington, D.C.

From its invasion and military occupation of Haiti from 1915 to 1934 to its support of the Duvalier regime, the U.S. has played a major role in destabilizing Haiti.

Ever since the devastating Haitian earthquake of 2010, international organizations like the United Nations and nonprofits like the American Red Cross have also had an outsize presence in the country.

Now, the unpopular president that foreign powers supported in hopes of achieving some measure of political stability in Haiti has been killed.

This story is a substantially updated and expanded version of an article, originally published on May 10, 2021.

Riots, Slave States, and Kool-Aid: Race Talk After the Election

It’s been a week since the presidential election, and much of the chatter prior to Election Day about how racially divided America is has continued in different forms thanks to a crop of strange and often disturbing news stories that feature racial subtexts. Here are a few.

After President Obama’s victory, reports circulated about a race riot on the campus of the University of Mississippi in Oxford. Apparently some students were angry over the Obama win and caused a ruckus which included the torching of an Obama/Biden poster. But was it a “race” riot?

A woman was fired from her job after using a racial slur to describe President Obama on Facebook and writing “maybe he will get assassinated.” She claims she is not a racist but was just stating an opinion.

Several commentators explored the phenomenon of angry aging white conservative voters who have been in denial about America’s changing demographics and what it means for their future.

In the wake of the Nov. 6 election, petitions seeking to secede from the union have been filed on behalf of some 30 states on the White House website. Most of the petitions ask to withdraw “peacefully” from the United States in order to form independent governments.

A new meme has been making the rounds in social media that displays maps of slaveholding states in 1859, legally segregated states in 1950, and the breakdown of red vs. blue states after the 2012 election. The suggestion is that the slaveholding and segregated states from the past bear an uncanny similarity to the states won by Romney last week. But the meme doesn’t mention that Obama won Florida (as well as Virginia). So, does the comparison meant to show how far we’ve come, or how some things never change?

Reports from The Grio and The Root find Cornel West calling President Obama “a Republican in black face.” And African American political pundit Boyce Watkins warns African Americans against “drinking the Kool-Aid” again and argues that Obama has yet to demonstrate a serious interest in tackling issues deeply affecting the African American community, including poverty, black unemployment, urban violence, and the mass incarceration of black men.

Those are just a few of the post-election race stories that are making headlines. Did we miss any? Is this much ado about nothing? Please share your opinions below. 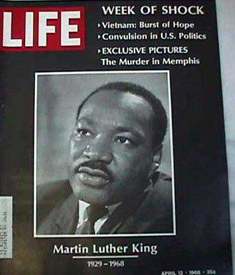 The new Life.com features a collection of never-before-published photos of the events in the hours immediately following Martin Luther King Jr.’s murder at the Lorraine Motel in Memphis. Here’s an AP story about the photos.
END_OF_DOCUMENT_TOKEN_TO_BE_REPLACED