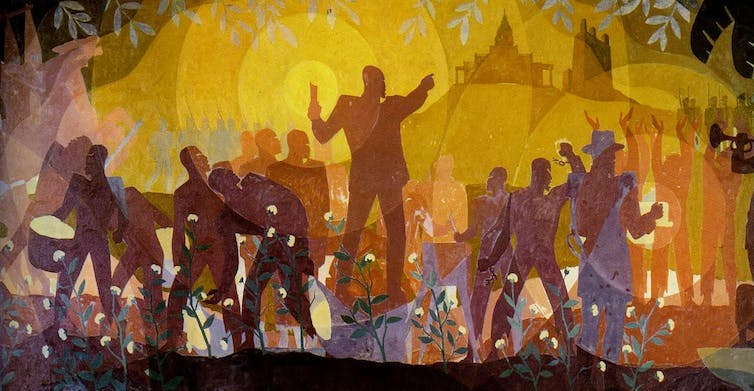 Though we often discuss World War I through the lens of history, we occasionally do it through literature. When we do, we’ll invariably go to the famous trilogy of Hemingway, Faulkner and Fitzgerald – the authors most representative of America’s iconic Lost Generation. Their work is said to reflect a mood that emerged from the ashes of a war that, with its trail of carnage, left survivors around the world with a despairing vision of life, self and nation.

The anxiety and hopelessness of the Lost Generation has become embedded in literary and cultural history. But for black artists, writers and thinkers, the war meant something entirely different: It spawned a transformation of the way African-Americans imagined themselves, their past and their future.

With Africa as a source of inspiration, a “New Negro” emerged out of the ruins of the Great War – not broken and disenchanted, but possessed with a new sense of self, one shaped from bold, unapologetically black models.

Before World War I, African-American literature depicted stoic, but constrained, black protagonists. They emulated European codes of class and respectability while rejecting any sort of African legacy or inheritance. In other words, they talked like white people, dressed like white people and accepted the narrative that white men were the source of America’s greatness.

From the most well-known 19th-century African-American writer, Frederick Douglass, to his less remembered contemporary, Alexander Crummell, literary black advocacy or racial uplift too often rested on this approach.

Still, in the years leading up to World War I, there were rumblings of the “New Negro” archetype. For example, in Paul Laurence Dunbar’s 1902 novel “The Sport of the Gods” and Pauline Hopkins’ serialized novel “Hagar’s Daughter,” we see restless, dissatisfied young people who have no desire to become shuffling, servile second-class citizens.

This defiance, however, would not become widespread in African-American literature until the end of the war.

Black soldiers abroad during World War I experienced a type of freedom and mobility unattainable back home. In cities from London to Paris, many, for the first time, could travel without the worry of being denied equal lodging accommodations or admission to entertainment venues.

Once they returned stateside, they became increasingly impatient with Jim Crow laws and codes of racial discrimination. Life, they realized, didn’t have to be this way. In a nation that was now half a century beyond slavery, the fever spread among a new generation of blacks.

In the war’s aftermath, racial tensions heightened – a reflection of this mood. The summer of 1919 was known as the “Red Summer” for the number of race riots that erupted around the country, with one of the worst in Chicago, where 38 people died.

And in black literature, African-American characters no longer looked to the white man – or his nations – as models of civilization. In his 1925 anthology entitled “The New Negro,” writer, philosopher and Howard University professor Alain Locke has been credited with marshaling in the era we now know as the Harlem Renaissance. Locke, in his text, called on a generation of emerging black writers, artists and activists to look to Africa and to black folk culture in the United States and the Americas as a way to mine and explore a new strand of humanity.

We see this in Langston Hughes’ poetry; in “The Negro Speaks of Rivers,” he heralds Africa as source of creativity and cultural grounding:

Two Jakes – one black, one white

Unlike the emerging literati of the Lost Generation, blacks, for the most part, weren’t angst-ridden over a post-war world devoid of meaning: they had never internalized the myth of America as a shining “city upon a hill.” For them, the war brought no end or loss, no disillusionment or void.

We see this difference if we compare Hemingway’s protagonist Jake in “The Sun Also Rises” (1926) to Claude McKay’s protagonist in “Home to Harlem” (1928), also named Jake. Unlike Hemingway’s lost, sullen and impotent hero who can’t find his way home, McKay’s Jake happily traverses Europe for a period after the war until he realizes he yearns for home.

While life is still a struggle and racism persists, McKay’s hero looks to the future with hope; he returns to Harlem where he relishes the many shades of black and brown beauties that he missed in Europe. McKay’s Jake immerses himself in a black world of love and laughter – a place that loudly celebrates life. He becomes inspired not by the readings and ideals of white thinkers and writers, but through black prototypes in and beyond America. His West Indian co-worker introduces him to Toussaint L’Ouverture and Jean-Jaques Dessalines, the black heroes of the Haitian Revolution, and to the history of great African empires dating back to antiquity.

In the literary works of black women, a new ethos also emerged. In Zora Neale Hurston’s 1937 novel “Their Eyes Were Watching God,” the main character, Janie, is daring in her quest for freedom: She leaves the confines of her restrictive community to take up with a younger man.

Black musicians, artists and writers of the Harlem Renaissance are celebrated as leaders of this transformative era in black history. But Harlem wasn’t alone. Cities such as Kansas City, St. Louis and Chicago also became hubs of black cosmopolitanism.

We also see that American literature is not a monolith of interpretation and experiences: In the case of post-World War I literature, even though one generation was lost, another was found.