Founders of one of the nation’s largest seminaries owned more than 50 slaves and said that slavery was morally correct.

But an internal investigation found no evidence the school was directly involved in the slave trade, according to the seminary’s president.

“They argued first that slaveholding was righteous because the inferiority of blacks indicated God’s providential will for their enslavement, corroborated by Noah’s prophetic cursing of Ham,” the report reads. “They argued second that slaveholding was righteous because southern slaves accrued such remarkable material and spiritual benefits from it.”

The seminary was founded in 1859 in Greenville, S.C., but suspended operations in 1862 during the Civil War and reopened in Louisville in 1877.

The Southern Baptist Convention was founded in 1845 when its members defended the right of missionaries to own slaves. Southern Seminary President R. Albert Mohler Jr. told Religion News Service the investigation expanded the knowledge and truth of what that defense meant.

“What we did not know and should have known was the degree to which open expressions of white racial supremacy were a part of the defense of slavery even on the part of some of the founding faculty of this school,” he said.

The report demonstrates how interwoven Southern Seminary’s history has been with the wider racial and political history of the denomination and the nation. It follows a 1995 resolution passed by Southern Baptists on the 150th anniversary of the denomination in which they said “we lament and repudiate historic acts of evil such as slavery” and “we genuinely repent of racism of which we have been guilty.”

Brantley Gasaway, chair of Bucknell University’s religious studies department, said the report, like the earlier resolution, is “symbolically significant.” It shows that some Southern Baptist leaders have grown in their sensitivity to diversity and racial reconciliation, he said.

But he said it did not point to substantive policy or structural changes.

“The leaders of Southern Seminary confess and lament their racist heritage, but they pledge only to continue to welcome and celebrate racial diversity at their institution,” said Gasaway, whose research focuses on evangelicals. “Such an approach reflects most evangelicals’ view that racial reconciliation does not necessarily include any reparations or recompense for the injustices suffered by minorities.”

Mohler said his decision to call for a one-year investigation by a team of six faculty — three African-American and three white — was prompted by actions of other institutions of higher education, specifically Princeton University, which released a report last year on its ties to slavery, including the sale of slaves on its campus.

Mohler said Southern was not found to be involved in the slave trade as an institution.

Asked if the seminary will apologize for its founders’ stances, Mohler said he could offer “a very clear statement of institutional sorrow,” but it is not possible to apologize for the dead.

“We certainly want to make very clear that we are a very different institution than we were then,” he said, noting its more recent history of inviting the Rev. Martin Luther King Jr. to the school in 1961. That visit prompted white Southern opponents in the Baptist denomination to withhold money from the school and the seminary’s president at the time to issue an apology.

Asked if the seminary is repenting for its ties to slavery, Mohler said “to the extent that repentance rightly applies, we surely repent.”

“The problem is theologically repenting for the dead,” he said.  “We cannot repent for the dead.” 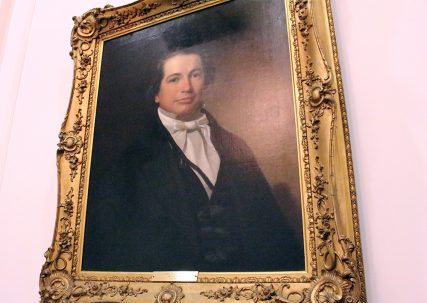 In his written introduction, Mohler said he rejoices in the “new humanity” now demonstrated on his campus. He expressed appreciation for the school’s black students, alumni, trustees and faculty. In its 2017-18 academic year, the seminary had 228 blacks enrolled, comprising 4.26 percent of the total student body of 5,354.

“Right here, right now, we see students and faculty representing many races and nations and ethnicities,” he wrote. “Our commitment is to see this school, founded in a legacy of slavery, look every day more like the people born anew by the gospel of Jesus Christ, showing Christ’s glory in redeemed sinners drawn from every tongue and tribe and people and nation.”

The reports concludes with a statement about the seminary’s eventual rejection of white supremacy.

“This report documents the contradictions and complexities of the experience of Southern Baptists and race in America,” it reads. “We have not overcome all the contradictions, but we are committed to doing so.”