How to talk about racism in the church without becoming bitter Fannie Lou Hamer, of Ruleville, Miss., speaks to Mississippi Freedom Democratic Party supporters outside the Capitol in Washington, D.C., on Sept. 17, 1965, after the House of Representatives rejected a challenge to the 1964 election of five Mississippi representatives. Hamer and two other African-American women were seated on the floor of the House while the challenge was being considered. She said, “We’ll come back year after year until we are allowed our rights as citizens.” The challengers claimed that African-Americans were excluded from the election process in Mississippi. (AP Photo/William J. Smith)

The American church has a problem with racism.

The issue is not new.

It includes support in the past for appalling acts such as lynching and racial terrorism and ongoing, inexcusable apathy. Although much has changed, the path toward deep diversity, authentic inclusion and radical repair remains long. Much of my time is spent telling Christians about the past and present concerning racism in the nation and the congregation.

Christians engaged in anti-racism work risk becoming bitter toward the church. In my speaking and travels, people often ask me, “How do you talk about racism without becoming bitter?”

Or they ask a similar question from a different angle: “How do you maintain hope in the midst of so much evil?”

At times, I’ve been tempted to give up on church people in frustration. Especially white evangelicals.

The 2018 midterm elections, for instance, revealed that yet again, white evangelicals chose to support a brand of politics that is inimical to people of color. In spite of the fear-mongering and overtly racist appeals of some candidates, 75 percent of white evangelicals voted for Republicans in the midterms.

It appears to me, as a person of color, that white evangelicals have little regard for my voice or those of people like me. Attempting to voice the concerns of black Christians among white churchgoers and receiving so much opposition makes it difficult sometimes for me to read the Bible and go to church.

I am still healing from wounds I’ve accrued over years of writing, speaking and teaching about racism and injustice. But no matter how discouraging the racial conditions in the church become, bitterness is not a healthy option.

To be clear, voting for Republicans is not the issue. The issue is Christians saying they support racial reconciliation on the one hand while simultaneously supporting politicians — in this case, Republicans — who traffic in racism and xenophobia on the other.

At moments like this, I think of Fannie Lou Hamer. 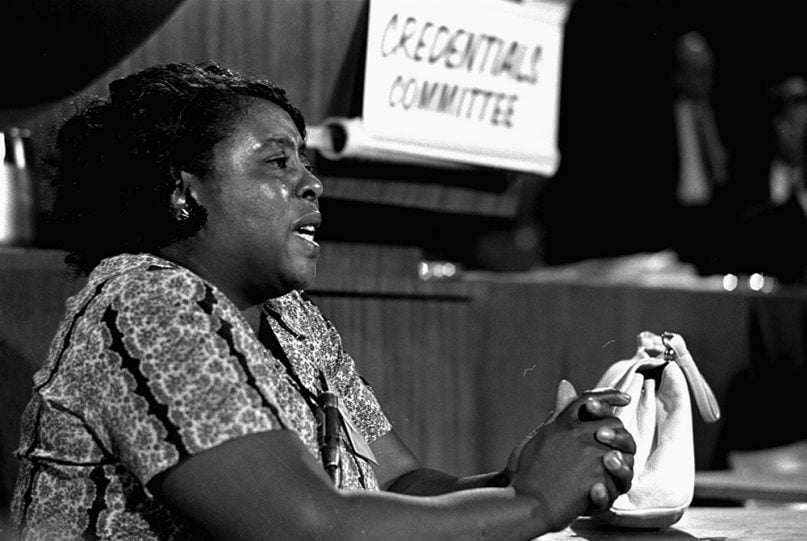 Fannie Lou Hamer, a leader of the Mississippi Freedom Democratic Party, speaks before the credentials committee of the Democratic National Convention in Atlantic City, N.J., on Aug. 22, 1964, in an effort to win accreditation for the group as Mississippi’s delegation to the convention. The Freedom group, composed almost entirely of African-Americans, was opposed by the regular all-white Mississippi delegation. (AP Photo)

Born in 1917 in rural Mississippi, Hamer was the last of 20 children immersed in a life of poverty as a sharecropper. In her 40s, she got involved in the civil rights movement after she heard young activists give a presentation about voting rights.

She then dedicated her life to fighting for equal rights for black people and more humane treatment of the poor.

One night in 1963, Hamer and some fellow civil rights activists, all of whom were black, were taken into custody on spurious charges by white police officers. The law enforcement officials took them to a jail and proceeded to beat each one, including Hamer. The harrowing experience left her with permanent health problems and emotional wounds such as depression. But that didn’t stop her from loving people, even her enemies.

“I feel sorry for anybody that could let hate wrap them up,” she said. “Ain’t no such thing as I can hate anybody and hope to see God’s face.”

When I think of saints like Fannie Lou Hamer and how they endured far more than I ever have in the fight for racial equality, I cannot engage in the self-indulgence of bitterness.

I have to keep striding toward freedom because I am part of a legacy of freedom fighters who have struggled under far more adverse conditions and yet maintained hope in God and the church.

Another way I find hope is through community. Through my work, I’ve met true allies across the color line. These women and men are quick to listen and slow to speak, which makes them more informed and more effective collaborators for change.

I have also been deeply enriched by friendships with people of color. Black Christians, who often make up a minority whether in church or school or the workplace, need regular contact with others who share similar experiences and backgrounds. We need a group where we can vent, laugh and recharge — folks around whom we don’t have to explain our existence. We need relationships with people who “get it.”

Finally, I try to keep the racial situation in the church in perspective by distinguishing between the universal church and particular people and congregations. I have often felt betrayed by specific Christians and churches. Individual Christians have berated me to my face — telling me how I get race wrong. Churches and denominations have rescinded speaking invitations, and many, many others have been bold in asserting that race is a social or a political issue, but not a gospel one.

In the face of such barbs, I have grown cautious.

I do my best to carefully choose speaking engagements and writing platforms that will let me communicate my views freely while not exposing me to malicious criticism. Unfortunately, many predominantly white Christian outlets and organizations prove extremely hostile to any anti-racist messages. But those particular places do not represent the church as a whole.

Christ is building his church. And as the Gospel of Matthew tells us, the gates of hell will not prevail against it.

The church is a beautiful bulwark against bitterness. It is a church that spans across time, nations, races and ethnicities. It is an undefeated community. It is this church, imperfect though it is, that persuades me to persist. It is Christ’s church, universal and precious, that Christians who hate racism should fight to improve.

While the bigotry of individual Christians and institutions may bend us toward bitterness, the beauty of Christ’s bride hearkens us back to hope.

(Jemar Tisby is president of The Witness: A Black Christian Collective,  co-host of the podcast Pass The Mic and author of “The Color of Compromise: The Truth About the American Church’s Complicity in Racism.” Follow him on Twitter @JemarTisby. The views expressed in this commentary do not necessarily represent those of Religion News Service.)