How faith leaders are responding to Jackson’s water crisis (RNS) — C.J. Rhodes, pastor of Mt. Helm Baptist Church in Jackson, Mississippi, was grabbing lunch from one of his regular spots when the restaurant manager made an announcement to all the patrons.

“Guys, we have to shut down. We have no water pressure.”

On Aug. 29, flooding from the nearby Pearl River caused complications at the O.B. Curtis Water Plant, resulting in a loss of pressure and running water for the entire city.

At more than 160,000 people, Jackson is Mississippi’s largest city and the state capital. Schools, which had only just commenced classes, had to be shut down, and the city lacked water for even emergency services such as firefighting.

The crisis quickly made national news, and people from around the country turned their attention to Jackson seeking explanations and ways to help.

Within the city, residents quickly organized to help their neighbors and communities. At the center of these efforts stood faith leaders.

“Churches throughout the city of Jackson across denomination, class and race have engaged in water distributions at their churches or by giving water away in other ways,” said Rhodes.

His church became a water distribution site. As provisions flooded into the city from around the country, churches like his became hubs for supplying residents. Sometimes churches filled in where municipal distribution efforts were limited. They could stay open after hours to serve people who couldn’t make it to the city’s distribution sites before closing.

While dealing with her own water troubles, she led her church in providing for others in the southern part of the city where they have a campus. Throughout the crisis many water distribution sites were set up at various locations, but Biard and her volunteers went even further. They loaded up cases of water and hand-delivered them to individuals and businesses.

“One thing people don’t understand is that when you have people who are disabled, people who are without transportation, they may not be able to go out to the distribution sites,” she explained.

Individual churches were not the only bodies that got involved.

“There’s only so much any local church can do … (the convention) acts as a connector,” Buckley said.

His goal was to mobilize people and supplies from across the state and nation to help people in Jackson. The state convention has its own 18-wheel truck as well as an extensive network of churches and personnel they contacted to help.

Despite the efforts of churches and faith communities to provide relief, the water problems in Jackson are much deeper than a breakdown at the water plant.

The city had already been under a boil water notice for a month before the entire water system failed. Even after the city’s water pressure was restored nearly a week later, the boil water notice has remained in effect.

Although the water plant has come back online, the infrastructure issues remain.

“Now that the plant is up and running, water is flowing again, now we have to live with pipes bursting … We still have lead leaching from the pipes into the water. We still have the EPA saying the city has failed to do a number of things and if they don’t remedy those things, there may be federal seizure of the water system,” Rhodes said.

Given the continued failure to bring Jackson’s water infrastructure system up to date, Buckley said he is preparing for the next crisis.

“What we’re absolutely convinced of is that we’re going to be faced with this again, and not in the distant future but in the near future,” he said.

Buckley is working to build a stockpile of supplies to have on hand the next time the city loses water. “We are inundated with water right now. We are partnering with the Church of Christ Holiness to create a reserve and supplies center to house water, buckets and all kinds of supplies,” he said.

The constant lack of clean water and water pressure has worn on Jackson’s residents, 80% of whom are Black.

Jackson exists alongside wealthier suburbs including Madison, a community north of the city that is also the wealthiest in the state.

After years of experiencing a crumbling infrastructure alongside the comparative wealth of nearby towns, a freshman college student who is Black asked Buckley, “What’s wrong with me?”

“We assured her there was nothing wrong with her. There is something wrong with the world,” said Buckley, who tried to help his young parishioner understand that the fault did not rest with who she was but with external factors and decisions made by others.

Anticipating the need not only for material supplies but spiritual relief, award-winning gospel artist John P. Kee volunteered to perform a benefit concert in Jackson.

A friend of Kee’s in Jackson connected him to Biard, and he immediately knew she was someone who could help him set up the concert but also become an ongoing partner.

“I wanted to come in and partner with such a ministry where we could actually connect, and when I’m gone I’ll stay in touch, and I’ll be family,” Kee said.

Fixing Jackson’s pipes, water plant and other infrastructure needs requires resources that exceed what local churches can provide. Yet the lightning-quick response of faith leaders and their communities when the hour of need emerged provides evidence that help will be there in a crisis.

The show of unity by churches in Jackson may even be a sign of greater changes to come.

To support local efforts to address the water crisis in Jackson, donate below. 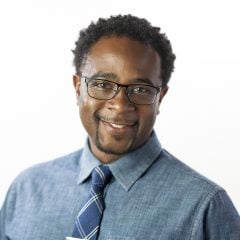 (Jemar Tisby, PhD, is a historian, author and speaker. He wrote “The Color of Compromise” and “How to Fight Racism,” and he frequently writes about race, religion and politics in his newsletter, “Footnotes.” The views expressed in this commentary do not necessarily reflect those of Religion News Service.)