Closure for the Jena 6

Lost in the din of the Michael Jackson coverage late last month was news that the racially charged Jena 6 saga had officially come to an end — at least from a legal standpoint. The six African American teens from Jena, Louisiana, made national headlines and inspired emotional protests when they were charged with attempted murder for beating a white classmate in 2006. Many considered the charges too severe, and a massive demonstration was staged in September 2007 to oppose the ruling. After nearly three years of dramatic twists and turns, the case quietly wrapped on June 26. Now the Jena 6, as well as Justin Barker (the white teen who was beaten in the infamous skirmish), are free to move on with their lives.

The terms of the plea agreement were revealed in the course of a two-hour court hearing at the LaSalle Parish courthouse. Mychal Bell, the defendant who was initially convicted as an adult for aggravated battery against Barker but later pled guilty to a reduced charge in juvenile court after the adult conviction was overturned, had been sentenced earlier to 18 months under state supervision. Each of the five remaining defendants in the case — Corwin Jones, Jesse Ray Beard, Bryant Purvis, Robert Bailey, Theo Shaw — pleaded “no contest” to the misdemeanor charge of simple battery. Each was placed on non-supervised probation for one week and must pay a $500 fine and in most cases an additional $500 in court costs. In addition, a civil suit filed by the family of Justin Barker was settled when the Jena 6 defendants (including Bell) agreed to pay the Barker family an undisclosed settlement. Attorneys were not allowed to reveal the details of the settlement, but a reliable source has disclosed that the payment was approximately $24,000. 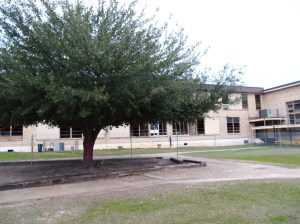 What lessons do we take away from the Jena 6 story? Six young men won’t be dragging a felony conviction into adult life. That’s reason for rejoicing, but as this saga approaches its third birthday, it’s fair to ask if we have learned anything.

“Jena 6” was briefly transformed into a popular movement that brought at least 30,000 people to the central Louisiana town of 3,000 in September of 2007.

Mass awareness of the Jena story was spread by the black blogosphere, radio personalities like Michael Baisden, internet-savvy organizations like Color of Change, and the brief but highly publicized involvement of civil rights celebrities like Al Sharpton and Jesse Jackson.

Unfortunately, the movement that culminated with the September 20th march lacked an end game. Nobody knew what came next, so not much did.

Or so it seemed.

My organization, Friends of Justice, helped lead the way. We started with the goal of recreating the coalition of reform organizations and legal firms that overturned a corrupt drug sting in Tulia, Texas. Long before anyone from the outside had taken an interest in the Jena story, we were sifting through legal documents, reading local newspaper accounts, and conducting dozens of personal interviews. When the facts were clear, we circulated a six-page narrative account describing what happened, why it happened, and what justice would look like.

Our narrative called for Judge J.P. Mauffray and District Attorney Reed Walters to recuse themselves from the Jena 6 cases. We supported a change of venue, a Department of Justice investigation, and a program of diversity training in the public schools. We knew none of this could be accomplished without a huge groundswell of indignation, but our first step was to unite and organize the affected community. The families and friends of the defendants gradually learned to withstand the pressure of an outraged white community and to tell their personal stories with verve and enthusiasm.

The families and friends of the Jena 6 had been gathering at a local black church and holding demonstrations on the steps of the LaSalle Parish courthouse long before CNN, NPR, and the Chicago Tribune were on the scene.

Just as the mainstream media was picking up on Jena, independent journalists and bloggers were warming to the story. Color of Change started collecting signatures for a petition and soliciting donations to a legal defense fund. Across America young black men and women were asking how they could help the Jena 6. The student body of Howard University got into the action and the civil rights community eventually swung its weight behind the Jena justice movement.

When I talked to the folks who came to the massive rally on September 20th it was quickly apparent that the folks who rode the buses were a bit fuzzy about the most basic facts. The general impression was that some white kids had hung nooses in a tree at the high school and black kids had retaliated by beating up one of the noose hangers. There was little understanding that Justin Barker, the victim of the December 4th beat-down, hadn’t been directly involved in the noose hanging incident or that the two episodes were separated by three months. 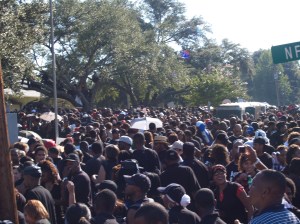 The facts in Jena were of secondary importance to the bus riders. They were drawn to Jena by personal experience. People told me they were there for a son, a boyfriend, or a nephew who had received grossly disproportionate treatment at the hands of the criminal justice system. These people had no trouble relating to the plight of the Jena 6.

When the crowds left Jena, the movement quickly ran out of gas. It didn’t matter. By that time the five Jena defendants still awaiting adjudication were represented by some of the best legal talent in America. D.A. Terry McEachern had been no match for the legal “dream team” that rose to the defense of the Tulia 46, and I knew Reed Walters would fare no better against the legal firepower he was facing. The facts were all on the side of the defendants. Another trial would have established the link between the hanging of the nooses in September and the tragic events of December. Reed Walters and his supporters in Jena’s white community simply couldn’t allow that to happen. 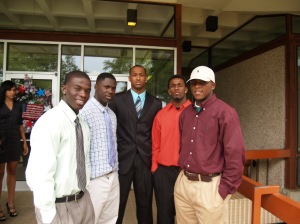 The Jena phenomenon demonstrates the power and the limitations of public narrative. Jena happened because public officials like Reed Walters and school Superintendent Roy Breithaupt didn’t want to revert to the apartheid world they were raised in, but they deeply resented the civil rights movement that had swept it all away.

Therefore, when Kenneth Purvis asked the high school principal if it was okay for black kids to sit under the tree in the school courtyard, these men froze. When white students sent a “hell no” message by hanging nooses in the school colors from that very tree, school officials insisted that the act was devoid of racial significance. When black students voiced their incredulity by gathering around the tree, Superintendent Breithhaupt called an emergency assembly in the school auditorium where D.A. Walters laid down the law. Turning to the black students who had been causing all the trouble, Walters reminded them that “with a stroke of my pen” he could make their lives disappear.

If Breithaupt and Walters had called a hate crime by its proper name, they would have validated the civil rights narrative they resented so deeply. So they resorted to threats. Nothing was going to change at Jena High School, and the black students would just have to suck it up.

Asked to explain his “stroke of my pen” remark at a pre-trial hearing, Walters admitted that he was angry with the students causing the unrest. The kids, he explained to the court, needed to “work out their problems on their own.”

Ultimately, Jena was a “Lord of the Flies” story about adolescent males functioning without adult guidance. If any of the remaining Jena cases had gone to trial, this version of the Jena story would have taken center stage. Unfortunately (and perhaps inevitably), this was not the way the Jena narrative unfolded in popular culture.

In Jena two powerful narratives competed for dominance. A “thug narrative” was concocted for folks who resented the civil rights revolution. Jena was about six black thugs doing what comes naturally and a Bible-believing prosecutor gutsy enough to hold them accountable. The hero of the thug narrative is Reed Walters, the victim is Justin Barker, and the villains are six black misanthropes. In the thug narrative, the noose incident in September was utterly disconnected from the the “attempted murder” of Justin Barker in December.

The people behind the massive September 20th protest embraced a “noose narrative,” which contrasted the lenient discipline meted out to the noose hangers in September with the grotesque prosecutorial over-reaction following the “schoolyard fight” in December. Reed Walters was a racist, this narrative argued, because he was way too soft on white kids and way too hard on black kids. In the noose narrative, the noose hangers are the villains, the Jena 6 are the victims, and the folks rushing to their assistance are the heroes.

While the noose narrative reigned in the blogoshpere, the thug narrative showed up in publications like the Jena Times, the Christian Science Monitor, and the Weekly Standard.

The “objective” mainstream media fell back on a “town divided” storyline in which angry proponents of the two competing narratives were given 15 seconds of fame.

Lost in all of this back and forth was a simple irony: Reed Walters’ “stroke of my pen” oratory unleashed a chain of violence that reached a violent crescendo in the December 4th altercation he was now trying to prosecute as attempted murder.

What are the implications of all of this for criminal justice reformers? Are we doomed to hawk simplistic morality tales to a tiny demographic of like-minded activists, or is honesty still the best policy?

Perhaps the truth lies somewhere between these two extremes. The goal isn’t just to get the facts straight or to rev up the faithful; we are trying to change public perception. Cases must be carefully selected. If we want to gain and hold an audience, even the most compelling stories must be pared to their essentials.

But even stripped-down narratives must comport with reality. Both sides in the Jena imbroglio wowed the faithful at the cost of losing credibility with the general public. If we are trying to change public perception, an ear for nuance is essential. America has changed dramatically from the day when a reformer like Fannie Lou Hamer could be beaten half to death in Winona, Mississippi, for advocating racial equality. “Nothing has changed” rhetoric appeals to impatient reformers, but it won’t get a hearing in middle America. Similarly, crude references to the depradations of “black thugs” may play well in the small-town southland, but this kind of talk doesn’t work in the wider world.

The public officials at the heart of the Jena story personify the southern dilemma. They were raised with one set of rules, then forced to adopt a new rule book. No one helped them negotiate these troubled waters; they simply had to make the best of a bewildering circumstance. No wonder they are confused-who wouldn’t be?

When Jena’s infamous tree gained iconic significance, the town fathers and mothers cut it down and built a new addition over the spot where the tree once stood. This was the most creative response they could muster.

This southern shadowland is most apparent in the criminal justice system. How can men and women who grew up attending Klan rallies be expected to dispense equal justice in the dawning days of the 21st century? How can people reared in segregated schools and workshops be expected to fight for cultural diversity? America is a work in progress. We ain’t where we need to be-not even close. But thank God Almighty, we ain’t where we used to be.

Ultimately, simplistic narratives change nothing. The Jena 6 aren’t heroes and they aren’t villains; they’re just ordinary small-town kids trying to make their way in a confusing world. Their attorneys won a smashing victory last month because they knew what they were up against and honed their message accordingly. There’s a lesson in that for all of us.