For each day left before Election Day, Martinique Mix, a graphic designer in Atlanta, is developing promotional materials for the African Methodist Episcopal Church’s get-out-the-vote efforts.

“We’re putting them on all social media and email to make sure it has a wide range so that it does reach the person who is 17 ½ and the person who is 77,” said Mix, the granddaughter of a retired AME bishop and president of the historically Black denomination’s Richard Allen Young Adult Council. She began working on the church’s V-Alert campaign in August.

“The information that we’re trying to give is basically trying to get people to understand the importance of the election, to understand that not only do you need to register but you have to make sure that you take the extra effort to vote,” she said.

While preserving the presidency of President Donald Trump is energizing many white evangelical Christians, many Black Protestants, evangelical and mainline, are motivated equally to oppose him, pointing to the president’s unquestioning support for police after the killings of George Floyd, Breonna Taylor and other unarmed African Americans, as well as his handling of a pandemic that has sickened minorities in disproportionate numbers.

But most pertinent in these last weeks before Election Day are allegations that the GOP has attempted to limit minority voting, particularly since the 2013 Supreme Court decision striking down parts of the Voting Rights Act intended to prevent some states from raising barriers at the polls.

In answer to these concerns, a coalition of clergy and social justice organizations, including the American Civil Liberties Union, Sojourners and the Lawyers’ Committee for Civil Rights Under Law, is mounting an effort called “Turnout Sunday/Lawyers and Collars” this year, recruiting at least 100 pastors and lawyers in each of nine states — Arizona, Alabama, Florida, Georgia, Michigan, North Carolina, Ohio, Pennsylvania and Wisconsin — for the campaign.

They will be a “moral and spiritual presence on the ground” and can offer legal expertise at polling sites, said the Rev. Barbara Williams-Skinner, co-convenor of the National African American Clergy Network, which is participating in the voter protection campaign.

Before the vote begins, the campaign will set up a “clergy hotline and call center” that will be supported by groups ranging from the NAACP to the Samuel DeWitt Proctor Conference to Black pastors in the United Methodist Church. Lawyers will help staff the hotline, answering questions about polling locations and consulting on voter intimidation issues.

“This election is viewed by most African Americans as a life and death situation,” said Williams-Skinner. “It is a choice between an America that continues to be steeped in systemic racism and injustice for people of color or an America that has space for every person of every background.”

While these groups often support voter mobilization, Williams-Skinner said they “never worked this tightly together because the stakes are higher.”

With the continuing coronavirus pandemic, many Black churches are complementing “Souls to the Polls” initiatives that have traditionally ferried people to the polls for early voting with socially distanced equivalents.

“More cars on the road as opposed to bus pools and van pools,” said the Rev. Leslie Watson Wilson, national director of People for the American Way Foundation’s African American Ministers Leadership Council. “I’ve even seen where people are going to be creative and pay for Uber or share rides or Lyft services to help people to get to the polls.”

The National Black Evangelical Association is among the groups planning to share email blasts from the Turnout Sunday initiative.

“The challenges of the time, and the attacks against voter registration and people voting, particularly Black people, is cause for doubling down efforts among all of us to push for fairness, access, education in terms of voting,” said the Rev. Walter McCray, president of the NBEA.

“There is a level of energy and coordination among Black church leaders at the highest level that I’ve not seen in my 20 years of organizing,” said Pastor Mike McBride, a Pentecostal minister who is working with both the multifaith, nonpartisan Faith in Action and Black church organizations to ensure people are registered and ready to vote.

McBride is a founder of the Black Church Action Fund, which is offering weekly virtual training in tweeting and sending pro-voting memes to “turn every single Black church person into a de facto digital organizer.” He hopes to get more than 2 million people to the polls.

Abrams, who founded Fair Fight, a voter protection organization, after her loss in 2018, has not limited her efforts to Christian groups. In August, Jewish and Sikh leaders joined a conference call with her and Black church clergy (including her parents, United Methodist Church pastors who said they used to take her into the voting booth with them when she was a child). The call also promoted the new documentary “All In: The Fight for Democracy,” which features Abrams’ efforts to overcome barriers to voting.

“I come to this moment of voting raised by people who taught me that faith is an action; it is not simply a thought,” said Abrams, on the call. “We have engaged communities of faith because I know if you want to see something done, give it to somebody in the church.”

Black celebrities have been recruited to the voter mobilizing effort. The AME Church has joined forces with Oprah Winfrey’s OWN Your Vote, developing a PSA featuring actress Deborah Joy Winans, a star of “Greenleaf,” on Winfrey’s OWN network.

“When segregation was the order of the day and laws prevented African Americans from voting, you held meetings in your church to protest,” said Winans, seated in front of a “Greenleaf” poster. “So now Own Your Vote is pleased to partner with you to go that next mile.”

Among African American women, there may be no greater celebrity than former first lady Michelle Obama, who co-chairs  a voter empowerment organization called When We All Vote. The group has partnered with the AME Church’s Women’s Missionary Society. 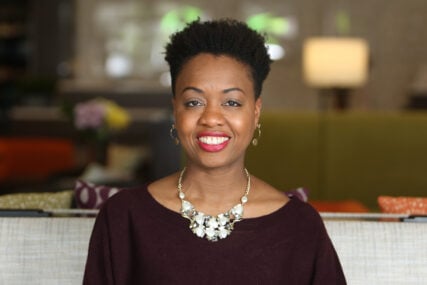 Some Black church members have taken it upon themselves to create their own voter education efforts. The Rev. LaKesha Womack, a North Carolina business consultant and ordained deacon in the African Methodist Episcopal Zion Church, held a voter education symposium as part of her “rethinking church” series. She’s also interviewing “everyday people” — from an African American pastor in Michigan concerned about gun violence to a white high school classmate in southern Alabama on Facebook Live — about why voting is important to them.

Other Black church officials are taking a more personal approach yet, pushing voter education with whomever they talk with ahead of Election Day.

Faith-based voter mobilization is often officially nonpartisan — endorsements by name or party are forbidden by IRS rules about nonprofits — but the National Congregations Study found in 2018-19 that Black church officials are “by far” the most likely of faith groups to acknowledge they endorse candidates, with 13% saying they have, though it’s unclear whether they made their pleas from the pulpit or more generally. McCray said that some of the president’s statements — such as his claim that racial violence at the right-wing protest in Charlottesville, Virginia, in 2017 included “some very fine people on both sides” —  have put endorsements beyond the realm of mere politics.

“Theologically there are times for the church or 501(c)(3) to take a stand that even may be outside the bounds set by 501(c)(3) when the issues are just that important,” he said. “This season may be one of those times when, as the apostle said in the early church, we ought to obey God rather than man.”

McBride said this year’s collaborative efforts — such as Black Church PAC events on Facebook and YouTube — can also allow clergy who won’t endorse from the pulpit to direct people in the pews to more “politically pointed conversations” about the upcoming election.

“People look to the Black church, whether they attend the church or not, to at least have some kind of compass,” he said, “and I think we will and have to continue that role even if it does kind of put a little bit of our partisanship on display.”

For the most part, added Williams-Skinner, people don’t need to be told whom to vote for. “We are connecting the dots between evictions, between police killings of unarmed Black people, between those who would try to eliminate health care, and voting for people who will do right by people of color,” she said.

“When you give people the information about what’s at stake in their life, they’ll make the right decision.”

This story was supported by the Solutions Journalism Network, a nonprofit organization dedicated to rigorous and compelling reporting about responses to social problems.